On December 18, 2017, Kumar Ajitabh, a Bengaluru-based techie, went out to meet a prospective buyer of his Maruti Ciaz car that he had enlisted on OLX. He has been incommunicado since. It's been 200 days and police is unable to trace him or his car, said Ajitabh's sister, adding the case isn't being handled efficiently and demanding that it be transferred to CBI.

Protest
'I am still hopeful that my brother is alive' 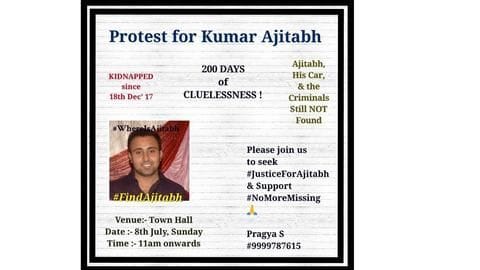 Pragya and Ashok Kumar Sinha, Ajitabh's sister and father respectively, had organized a peace protest at Town Hall in Bengaluru yesterday, where they questioned the tepid pace of the investigation. "How long can we keep waiting? I am still hopeful that my brother is alive," she said, adding either the case be transferred to the central agency or the police intensify the search.

"It's a shame that the government and the police cannot protect innocent citizens. I also went to New Delhi and handed over a representation to the Prime Minister and the home minister's office to speed up the case," said 65-year-old Ashok, a retired banker.

On Thursday, the Karnataka HC, while hearing a petition by Ashok, assured him that if he feels the investigation is moving slowly, it'll be transferred to CBI. However, the progress of the probe will not be intimated to the family, the HC ruled, adding it's "in the best interests of the missing person". The next hearing on the case is scheduled for July 31.

Police tracked the SIM number from which the "buyer" on OLX made calls to Ajitabh to a truck driver, who said he found it on a Yeshwanthpur road. Further investigation revealed the SIM belonged to one Sabeena of Kolar, some 70kms from Bengaluru.

Career
Car sale was to fund an IIM Kolkata program

On that fateful day, the 30-year-old British Telecom employee had left his Whitefield residence at 6.30PM. His childhood friend-cum-roommate Ravi shared he wasn't notified of the meeting. "He had got through an executive MBA program at IIM Kolkata, and had to pay around Rs. 5L by December-20. I guess that's why he had put up his (one-year-old) car for sale," Ravi shared.

After he went missing, his family started #FindAjitabh campaign on Twitter and Facebook. The FB community has already gathered more than 1,000 followers. Ajitabh, a B.Tech from Manipal Institute of Technology, had worked for TCS earlier. He had moved to Bengaluru in 2010.