Bengalureans get water through ATMs? Read on to know more

Braving long queues and scorching sun, Bengaluru resident S.Sebastian stood in front of the ATM near his Vasant Nagar house. No, this isn't a sequel of demonetization-drama. Sebastian was standing in front of the water ATM installed in his locality, which dispenses filtered water at a measly price. These kiosks have been installed to cater to economically-weaker sections residing in different parts of Bengaluru.

Installed by corporates, businessmen and MLAs, who of course want to score brownies for polls, these water-kiosks are attached with a reverse osmosis system. Retailers charge anything between Rs. 50 to Rs. 80 for a bubble top, taking advantage of the water crisis. In comparison, paying just Rs. 5, people get 20-litres of potable water, and so they don't mind the long lines.

Water ATMs made inroads into Bengaluru in 2014, when legislator Aravind Limbavalli had decided to install 200 of these using MLA funds in 34 wards of his Mahadevapura constituency. Shantinagar and BTM Layout wards were next to get these kiosks, which run between 7am and 7pm every day. Sometimes, firms like Tata Trust, Huawei and Anheuser-Busch InBev also pitch in using their CSR funds.

Show some love
Legislators doing something for people should be applauded 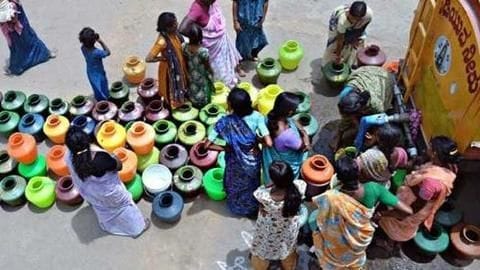 Water-ATM isn't a novel concept, as Delhi, Hyderabad, Mumbai and Jaipur already have those. But it is much-needed as water-crisis looms large due to urbanization and reduction in water-bodies. That's why we need social enterprises like Piramal Sarvajal, which has set-up more than 332 such water-ATMs. If a legislator takes these initiatives, even if with vested-interest, he/she should be applauded at least once.