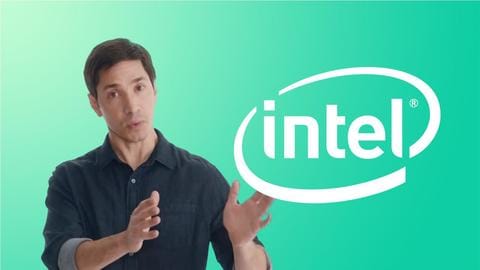 Actor Justin Long who did the "I'm a Mac, and I'm a PC" commercials back in the day has been hired by Intel for a series of advertisements. The satirical short video ads compare Intel-powered laptops with Apple's MacBook range of products. While the comparison doesn't feature performance statistics, it suggests that Intel is clearly intimidated by Apple's present and upcoming M1 Macs.

Nearly two decades ago, Apple hired actor Justin Long and comedian John Hodgman for a series of ads comparing Macs to PCs. The ads intended to drive adoption of Macs, and began with Long saying the iconic "Hello, I'm a Mac" line. Intel's new commercials begin with the throwback: "Hello, I'm a... Justin". The new campaign even mimics the white background from Apple's ads.

In each ad, Long examines an Intel-powered laptop and then shows how the MacBooks fall short. In separate commercials, he mocks Apple's Touch Bar, lack of support for multiple external displays, lack of touchscreen or 2-in-1 functionality, and MacBook's "grey and greyer" color scheme. Another ad shows Long interacting with a gamer who says "no one really games on a Mac".

In another ad, Long compares the touchscreen functionality of ASUS's ZenBook Duo to the lack of the same in Apple's MacBook Pro. He also ridicules the latter's Touch Bar. Long also demonstrates how an Intel-powered 2-in-1 notebook combines the functionality of an iPad, Apple Magic Keyboard, and Apple Pencil used together.

Justin Long's Intel commercials come just months after John Hodgman reprised his role as the PC guy from Apple's older commercials. It also ties into Intel's diminishing market share, thanks to AMD's better performing Ryzen CPUs and Apple's decision to manufacture its own processors. It is noteworthy that Apple emphasized its current-gen M1 Macs will only get more powerful in future revisions.