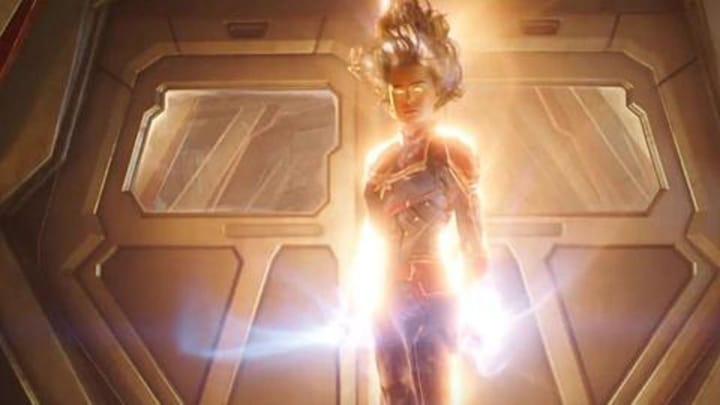 Marvel Studios dropped the second trailer of Captain Marvel, before its March 8, 2019 release. It debuted during the halftime of ESPN's Monday Night Football, as we had reported. The trailer took us deeper into Carol Danvers' journey to becoming Captain Marvel, her role in the alien war between the Krees and Skrulls and a developing relationship with Nick Fury. Here're the finer details.

Captain Marvel's movie is a period piece, much like Captain America. The trailer establishes the 90s settings immediately with a shot of Blockbuster Videos, the popular rental service. The trailer goes on to show Brie Larson as Carol Danvers, aka Captain Marvel, as she tries to balance life on earth and fight the intergalactic Kree-Skrull war. Notably, this is Marvel's first female superhero movie.

The trailer begins with Carol controversially punching an old lady, who turns out to be a shape-shifting Skrull. This is followed by a conversation with Fury, who tries to wrap his head around the information dump about an alien war between two races. Featuring flashbacks into Carol's past, we see how she became Captain Marvel and finally, we see her harnessing the binary power.

Unlike previous belief, Jude Law is not playing Carol's mentor

Unlike our previous belief that Jude Law would play Captain Mar-Vell, who was responsible for turning Carol to Captain Marvel, it now appears he will be playing the Kree villain Yon-Rogg. Instead, Annette Bening will be portraying Vers, who eventually creates the superhero. Further, Carol's spaceship accident, which led her to be discovered by Krees, seems to have been caused by Skrulls.

Paws out in the 'Captain Marvel' trailer

Comic fans might have noticed that Carol's cat in the movie is called 'Goose' and not 'Chewie'. While this is a Top Gun reference (Goose co-piloted with Tom Cruise-portrayed protagonist, Maverick), the cat is one of the last remaining members of Flerkens, an alien race. They are feral and their bodies have inter-dimensional portals. Hopefully, the film will give us a glimpse of that.

Trailer remains loyal to the comics

The trailer remains loyal to the comics, referring to Jamie McKelvie's design of Carol's retractable helmet. He had given Carol's character a new suit, rooted in her Air-Force days, and a new helmet to help her breathe in space. Earlier, she donned a Kree fin.

What happened when Carol harnessed the Binary Form

The most notable part of the trailer was Carol entering the Binary Form, which allows her to harness energy from 'White Hole', giving her cosmic powers. The film's loyalty to comics shows her hair billow due to the power. The trailer ends showing Carol realizing that she shouldn't be a Kree weapon, but be the hero and end the Kree-Skrull war.

Our take on the trailer

The trailer truly shows how everything begins with a hero, as Carol soars high towards the end of the trailer, firmly embracing her Captain Marvel identity. With displays of her power in this film, we hope Marvel explores some gaps in its cinematic universe during the 1990s. Most importantly, we hope they tie in how Marvel will appear in Avengers 4 to face Thanos.