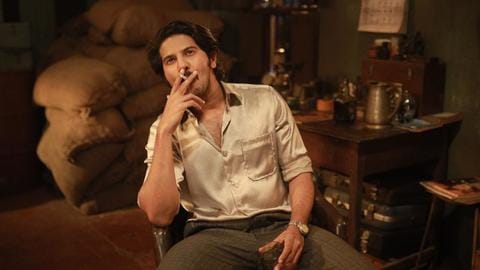 Dulquer Salmaan fans are super excited about his upcoming venture, Kurup, where he will be essaying the role of a grey character for the first time. And, he looks extremely at ease in the skin of the titular character as seen in the trailer, which was dropped recently. Salmaan plays real-life underworld don Sukumara Kurup in the movie. Here's a trailer breakdown.

Trailer
Kurup vows to succeed in life, 'sooner or later'

We get an idea of Kurup's wit in the very first scene where he fakes his voice, speaking in Tamil to know the whereabouts of the cop who is on his trail. Then flashbacks show Kurup seeking training at an Indian Air Force camp, vowing to succeed in life, "sooner or later." The clip also features Sobhita Dhulipala, Indrajith Sukumaran, and Shine Tom Chacko.

Comments
Sushin Shyam's music is excellent at setting the mood

The real don had scammed his own death to get insurance money. And, this episode is referenced in the trailer. Salmaan goes all out in creating a magnetic aura about him that comes with the tag of "India's longest wanted fugitive." The clothing, rotary dial phones, Cathode Ray Tube televisions, and all take you to a bygone era. Sushin Shyam's music keeps you hooked.

Information
The film is coming to theaters on November 12

Although the Oh Kadhal Kanmani star is playing the "bad guy" in the movie, director Srinath Rajendran's treatment of the titular character is nothing antagonistic. Like Shah Rukh Khan's Raees and numerous other "don" movies, the criminal is larger than life here. Now, the final tone of the makers will become clearer once the movie drops in theaters on November 12.

Credits
'Kurup' will be released in four languages, apart from Malayalam

Produced by M Star Entertainments and Salmaan's own Wayfarer Films, the Malayalam thriller has been written by KS Aravind, Jithin K Jose, and Daniell Sayooj Nair. Going big, makers had released the trailer in five languages: Malayalam, Tamil, Telugu, Hindi, and Kannada. The film will also have these language options. Before catching the venture, you can listen to its first single, Pakaliravukal.