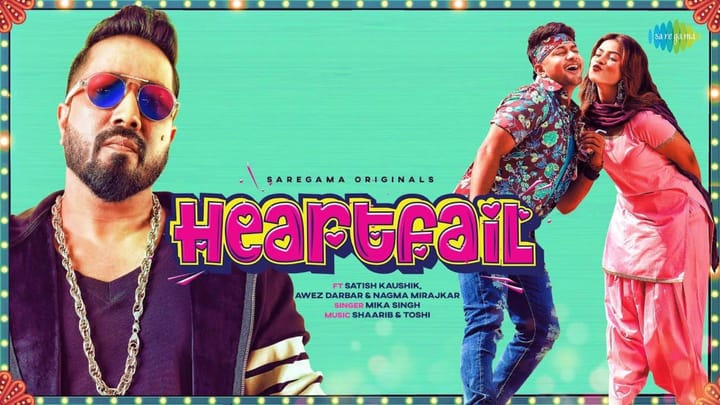 Social media influencers Awez Darbar and Nagma Mirajkar, who are reportedly dating, had recently stormed up the internet by sharing certain images that hinted at their engagement. But soon it was revealed they were simply working on a new song, Heartfail, together. Voiced by Mika Singh, the music video has been produced by Saregama Music and was released on YouTube recently. Here's our review.

Heavily relying on beats, song is not catchy enough

The music by Shaarib and Toshi is quite heavily dependent on beats but the chorus or the verses lack any strong impact. Listening to it for fun is okay but there's no recall value to it that will make you remember the track. Even Singh's powerful voice comes off as weak. Lyrics by Manoj Yadav cannot be taken seriously.

Like, what do the lyrics, "Dil ka heart fail ho gaya [My heart had a heart failure]," even mean? Coming to the MV, Darbar and Mirajkar play lovers trying to get together, while Satish Kaushik serves as the obstruction between the two. Mirajkar nearly has nothing much to do, meanwhile, Darbar's dancing and expressions are lively. Kaushik gives his all to the part, too.

"It's a fun-filled song and an entertaining one too and I'm sure audience will love this one (sic)," Singh said, whose last major non-film release had been the infamous diss-track, KRK Kutta. Following a heated public spat with actor/critic Kamaal R Khan, the Pungi singer had released the spiteful song. Meanwhile, Darbar opined, "Heartfail will surely be an anthem."

It won't appeal to casual listeners though

In terms of storyline, the video has a lot going but that takes away interest from the already lackluster song a bit more. Prince Gupta, of Dance India Dance-fame, has directed and choreographed the video. Fans of the internet sensation would surely eat up the production, but for others this one simply is not appealing enough. Verdict: Song gets 2.5, MV receives 3/5 stars.