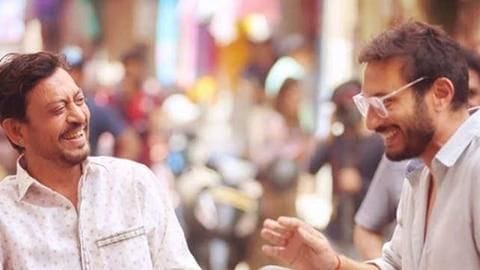 Just a day ahead of the trailer launch of his film Angrezi Medium, Bollywood actor Irrfan Khan has shared an emotional message for his fans, revealing that he won't be able to promote the movie. In a video posted by the movie's production company Maddock Films, he talks about the movie and his illness. Notably, Irrfan was diagnosed with neuroendocrine tumor, two years back.

The video, that features several stills of Irrfan from the movie's sets, the 54-year-old actor can be heard saying, "My film Angrezi Medium is extremely special to me. I genuinely wanted to promote this film with as much love as we have made it with." "But I am struggling with my health. Whatever the status would be, I will keep you updated," he adds.

Details
Two years back, Irrfan was diagnosed with a neuroendocrine tumor

To recall, Irrfan was diagnosed with neuroendocrine tumor in March 2018. He then left for London for treatment, and returned to India in February, last year. During his brief stay in India, he resumed filming his parts for Angrezi Medium. Some months later, the actor again flew down to London for a surgery, before returning to India in September 2019.

Quote
'Enjoy the trailer and...wait for me'

In the video, Irrfan goes on to add, "There is a saying, when life gives you lemons, you make a lemonade. It is always easier said than done." "But you have no other choice, apart from remaining positive...Enjoy the trailer, be kind to each other and watch the film. And yes, wait for me," he says, before signing off.

Directed by Homi Adajania, Angrezi Medium is a sequel to 2017 hit comedy movie Hindi Medium, which also starred Irrfan. Produced by Dinesh Vijan under the banner of Maddock Films, the upcoming movie also stars Kareena Kapoor Khan, Radhika Madan, Deepak Dobriyal, Ranvir Shorey, Pankaj Tripathi, and Dimple Kapadia, among others. It is set to hit the theaters on March 20.