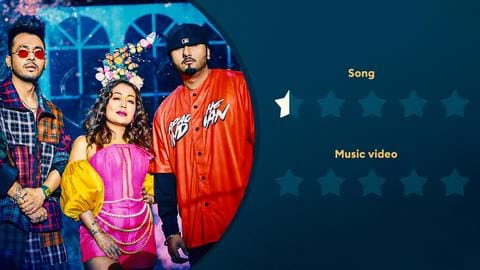 When you see a particular video is trending at number three on YouTube Music, and it has over 48L views, you have certain expectations from the song and video. But, people's favorite trio of Neha Kakkar, Tony Kakkar and Yo Yo Honey Singh's latest offering Kanta Laga leaves quite an opposite impact and bad aftertaste, like when you have acid reflux. Here's our review.

Details
The song is 3.38 minutes long, features the three singers

The song is 3.38 minutes long, and both the video and track have only these three known faces and voices. The words start telling us that a woman is eagerly waiting behind her palace for her prince, but he isn't arriving. That was Neha's part. Her brother Tony's portion has gender reversed, but says the same thing. "Kanta Laga Ooi Maa," is the hookline.

Honey Singh's rap (or whatever that was) starts well after 1.40 minutes into the song, and this time too he has maintained his reputation, that of a misogynist. Sample this: "Naachti Jaa Na Na Ho Pareshan Aaja Mita Doon Main Teri Thakaan (Keep on dancing, without any worry....come to me, I will erase your fatigue)." The lyrics do not make sense at all.

Now coming to the music: It has just one beat, and a couple of tunes. There is no variation and it feels like that nursery children are reciting poems musically. In fact, they would do a better job than these three artists. The video is a torture for your eyes because the costumes are jarring and ugly. The sets look clumsy as well.

Conclusion
It's only for their ardent fans; gets 0.5 star

Presented by Anshul Garg, the video has been directed by Mihir Gulati. The song and video are available on Desi Music Factory's YouTube channel. ONLY the ardent fans of Neha, Tony and Honey Singh should watch it. I would request no one else to try this stunt! Verdict: 0.5 star for the song and zero for video (yes! it is that horrible).