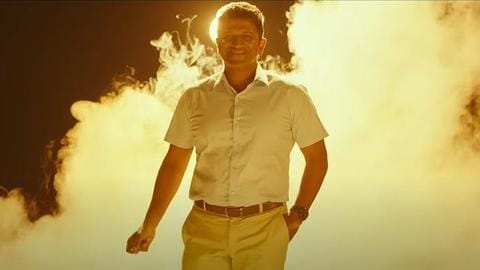 The teaser of the Kannada film Luckyman featuring Krishna aka "Darling" Krishna was dropped by its makers on Monday. The 1:01-minute-long teaser is a complete package with all elements such as comedy, drama, emotions, and romance. Also featuring late actor Puneeth Rajkumar, the film is the official remake of the Tamil drama Oh My Kadavule. Here's more about the upcoming venture.

Context
Why does this story matter?
Observation
What did the teaser show?

Rajkumar, who appears as God, comes down to earth to help a young couple through the very many difficulties that they face as newlyweds. The friends-turned-couple uses the guidance of God himself to pass through this difficult phase in their life. Though there are only a few dialogues one can get a gist of what the film is all about.

Details
Meet the cast and crew of the film

Sangeetha Sringeri and Roshni Prakash will be seen as co-leads. Nagabhushana and Sadhu Kokila will play supporting roles. The Nagendra Prasad directorial is produced by PR Meenakshi Sundaram and R Sundara Kamaraj under the Parsa Pictures banner. Popular music director duo V2 (Vijay and Vicky) has composed the music, with Jeeva Shankar as the cinematographer, and JV Manikanda Balaji as the editor.

Meanwhile, a photo of Appu's statue recently went viral. Created by the artists of Prakruti Art Centre, the statue had Rajkumar receiving the blessings of the spiritual guru Siddharudha Swami in the form of Lord Vinayaka. A 7.4 feet tall statue of the superstar was also erected at Vijaynagar's Hospet, Bengaluru on June 5, which was unveiled by his wife Ashwini.