#Kalank: 'Ghar More Pardesiya' is all about Madhuri-Alia's stunning jodi 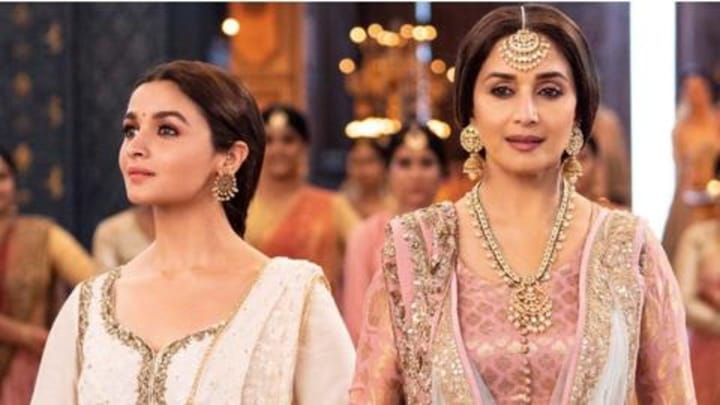 It's just a month left for the release of Karan Johar's multi-starrer production Kalank and the excitement around it is palpable. The makers are making every effort to maintain the hype among the audience. In this context, they have released the first song of Kalank, Ghar More Pardesiya, starring Madhuri Dixit and Alia Bhatt, today and it has left us stunned.

Roop is mesmerized by Zafar's magical world and charm

The soulful track begins with Madhuri singing on a swing as we're introduced to the magical world of Zafar aka Varun Dhawan with Roop aka Alia Bhatt. The two are seen entering the streets and enjoying the Ramleela (separately), which is underway in Zafar's locality. Roop is mesmerized by the serene beauty and charm of the streets of Hira Mandi and so are we.

Later, Alia enters Madhuri's palace and here comes the best part, a melodious jugalbandi between the divas (sung by Shreya Ghoshal and Vaishali). Alia impresses all with her Kathak skills. Not just Madhuri, but we're floored as well as she dances her way out. Needless to say, the 25-year-old is certainly a sight to behold in the song, leaving you wanting for more.

Notably, Alia, who performed like a professional dancer, was never a trained Kathak dancer. In fact, the diva took extensive training from the legendary Kathak guru Pandit Birju Maharaj, especially for the facial expressions. "I trained in the basics of Kathak for a year just for the song. One week before we shot, I went to Pandit Birju Maharaj for expressions," Alia had stated.

'Kalank' gets new release date to capitalize on extended weekend

Apart from Alia, Madhuri and Varun, Kalank also stars Sanjay Dutt, Sonakshi Sinha and Aditya Roy Kapur in lead. Helmed by Abhishek Varman, Kalank is set in the pre-independence era of 1945. The movie, which was earlier slated to release on April 19, has now been advanced for its release. Kalank will now hit theaters on April 17 to capitalize on the extended weekend.