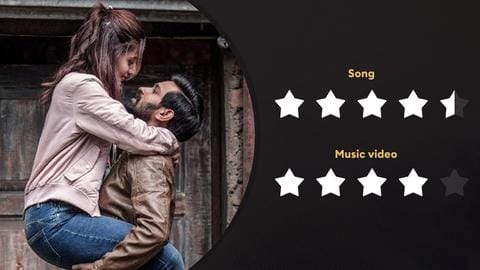 T-Series has released a new song Milaa Yun from the much-awaited movie, Haseen Dillruba. The soulful song stars the film's lead actors, Taapsee Pannu and Vikrant Massey as Rani and Rishu. They are seen sharing the first moments of falling in love. Sung by Yashita Sharma and Abhay Jodhpurkar, the track is composed by Amit Trivedi while the lyrics are penned by Kshitij Patwardhan.

While the song is heart-touching, the lyrics melt your soul. The first time its signature line, "Milaa yun jaise bichhda na tu (We met like we were never apart)," plays, it gives a feeling of romance. But when you hear it at the end, it conveys the pain of a broken heart. This beautiful song takes you from a romantic scene to an emotional ending.

The music video is not just random shots from the movie, instead, tells a story. A budding romance is shown between the newlyweds at the beginning, sharing glances and spending quality time. But, then Rani sees Rishu with another girl, and trouble in paradise begins. Massey and Pannu are outstanding in it. In fact, one can feel the pain when Pannu walks away crying.

The song, Milaa Yun, is receiving positive responses from viewers. It has surpassed 4 lakh views within a few hours and the numbers keep increasing. The film's first song released on June 15, which has now crossed 16 million views on YouTube. While Dil Melt Karda is cute, the new song "will carve all the romantic notes in your heart," T-Series posted on Twitter.

Story
What is the movie 'Haseen Dillruba' about?

Releasing on July 2 on Netflix, Haseen Dillruba stars Pannu, Massey, and Harshvardhan Rane. It's a mystery thriller about a wife, the prime suspect in her husband's murder who reveals details about her troubled marriage that further makes it difficult for the police to solve the case. Coming back to Milaa Yun song, the verdict is: Song (4.5 stars), music video (4 stars).