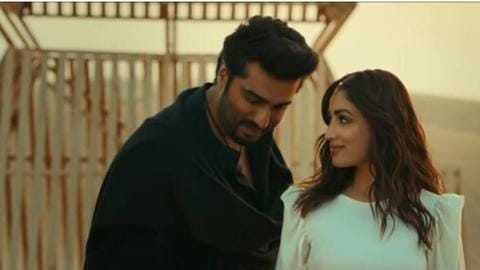 Ahead of its release on September 17, makers of Bhoot Police dropped a new song, titled Mujhe Pyaar Pyaar Hai, from the movie. The love ballad, voiced by Armaan Malik and Shreya Ghoshal, stars lead actors Arjun Kapoor and Yami Gautam in the music video. The fresh melody in the audio and the fresh pair onscreen make for an enjoyable experience. Here's our review.

Waiting for a longer version with more of Ghoshal-Malik's harmony

Composed by the Sachin-Jigar duo, Malik's voice is honey-smooth and we're grateful for a novel romantic track. Lyrics by Priya Saraiya bear the "Bollywood love song" stamp. The 2:46-long track seems to be a shortened version released before the release of the film. We sure hope it is, for we would have loved to hear more of Ghoshal's voice, especially in harmony with Malik's.

The music video is as typically 'filmy' as it gets

Now coming to the video, it is as "Bollywood" as it gets. Set against the backdrop of a desert and abstract art pieces, Gautam stares at the camera and smiles throughout the song (given she doesn't have words to lip-sync to), and Kapoor struts professing his love like every filmy "hero" ever. Our advice: Tune into the song via music streaming platforms and enjoy!

This is one of Malik's best recent songs

Kapoor and Gautam look good together and it will be interesting to see their chemistry unfold when the ghost-hunting movie drops on Disney+ Hotstar. The track is one of the best voiced by Malik in the recent past and the chorus is thoroughly groovy. Verdict: The song gets 4 out of 5 stars but the music video disappoints, taking 2.5/5 stars.

Previously, title track of the Pavan Kirpalani directorial was released

Earlier, makers had dropped the title track, Aayi Aayi Bhoot Police. This Sachin-Jigar composition failed to impress us fully with mediocre choreography to back it up. Also, Gautam's absence was missed there. Starring Saif Ali Khan and Jacqueline Fernandez alongside Kapoor and Gautam, Bhoot Police is all set to win hearts with an OTT release. The Pavan Kirpalani directorial is produced y Ramesh Taurani.