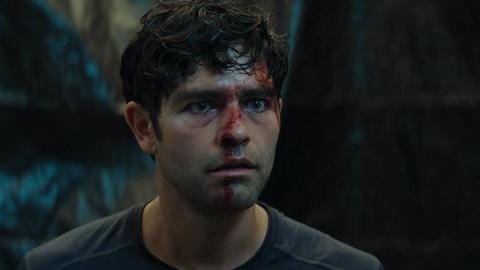 Get ready to obsess over Netflix's dark, new limited series, Clickbait! The first look teaser and photos of the limited eight-episode series are out, showing Adrian Grenier in the role of a loving friend, brother, husband, and father. However, the story brings the unexpected when Adrian's character, Nick Brewer, mysteriously disappears. That's when they "uncover a side of Nick they didn't know existed."

Who is Nick Brewer? That's the question around which Clickbait will rotate. But from the looks of it, this character seems as the devil who wears Prada. Is there something about Nick that is not known to his beloveds? It seems so. Because, we see a badly beaten lead holding a card that reads, "I abuse women. At 5 million views I die."

Is it Nick's 'confession' or is it a threat?

Is this Nick's "confession" or has he been issued a threat by the one who has held him captive? Might be both! And that's when the teaser gains pace. Like any other thriller, Clickbait will also take a U-turn from a happy life. But, in this one, we will see "fractures" between real and virtual life, promising a great binge-watching experience.

The series explores the dangerous side of social media

Will Nick's family be able to save him, amid growing viewer numbers? Given the synopsis, Clickbait is expected to be a compelling high-stake thriller drama on the platform. Moreover, the story will throw light on the uncontrolled impulses of the social media age. This riveting series will hit the streaming platform next month, as was revealed in the almost one minute long teaser.

Know who is playing what in the series

Be ready to 'Clickbait' on August 25 this year!

Tony Ayres is the creator, show-runner, and executive producer of the show. Christian White is the co-creator, co-producer, and writer, along with Brad Anderson as the lead director. Matchbox Pictures, Tony Ayres Productions, and Heyday Television produced Clickbait will drop on August 25, 2021.