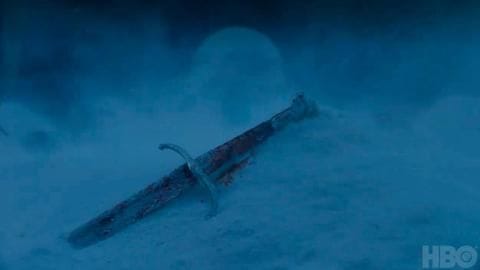 Game of Thrones dropped a new teaser ahead of Season 8 release. To put it simply, it crushes the viewers' hopes. In typical GoT fashion, the teaser hints at its motto of 'All Men Must Die' and shows a dilapidated Winterfell, seemingly after the events of the battle with the White Walker army. Read on to know more about the new teaser titled Aftermath.

It begins with a piece of ominous music and shows a desolate Winterfell and a Stark flag in ruins. Covered with snow, as always, Winterfell in this teaser appears empty and wrecked. Although the teaser does not give any major plot points away, it does hint at the arrival of a mysterious figure (presumably the Night King) towards the end.

Significance
Will everyone die in the upcoming battle?

As per the teaser, there is a possibility everyone dies in the battle. We see several items buried in snow, indicating that winter is indeed here. We see Bran's wheelchair, Dragon chain of Daenerys, Lyanna's feather, Tyrion's 'Hand of the Queen' pin, Jaime's golden hand, Arya's Needle and Jon's sword, Longclaw. Each item represents its owner and we hope it's just a what-if scenario.

Interpretation
GoT can't be trusted with the safety of fan favorites

The teaser can be interpreted in many ways. The absence of bodies can be linked to White Walkers' habit of not leaving bodies behind. Or maybe, it is about the defeat of Winterfell and a scenario where everyone retreated, leaving their things behind. Another possibility is that it simply signifies Night King's arrival in Winterfell. Notably, it doesn't mention anything about Cersei or Euron.

The first promo, titled Together, shows dragons flying in Winterfell, the Iron Fleet, Jon and Dany together, Cersei, Varys, the Unsullied, and Tyrion saying, "We must fight together now, or die." The second promo, Survival, shows a frantically running Arya, struggling Jaime, smiling Cersei, a voice-over by Sam and a resolute Grey Worm. The final season of Game of Thrones releases on April 14.