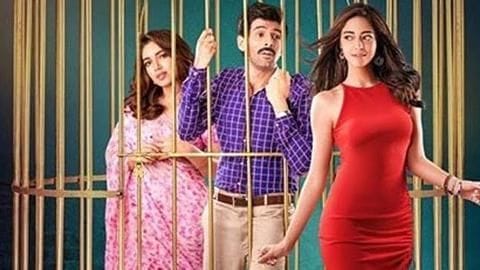 It's 2019 but mainstream Bollywood filmmakers and actors still can't get over their obsession with mediocre storytelling, non-sensical humor, pathetic performances, and of course, song remixes, for some reason. Today, T-Series dropped the official trailer of Pati Patni Aur Woh, a seemingly regressive situational comedy, starring Kartik Aaryan, Bhumi Pednekar, and Ananya Panday. It is set to release on December 6. Here's our take.

Details
'Pati Patni Aur Woh' based on an eponymous 1978 film

Directed by Mudassar Aziz, Pati Patni Aur Woh is a romantic comedy, portraying the life of one Abhinav Tyagi (Kartik), a middle-class man and a philandering husband juggling his relationships with his wife (Bhumi) and girlfriend (Ananya). The trailer also shows glimpses of Aparshakti Khurana. For the uninitiated, the movie is based on an eponymous 1978 film, starring Sanjeev Kumar, Vidya Sinha, Ranjeeta Kaur.

The trailer clip, nearing three minutes, is loaded with jokes. The only catch - none of them comes close to being funny. In fact, most of the dialogs are utterly cringeworthy and the humor, if it can be called so, oscillates from being senseless to shamefully regressive. Also, for reasons unknown, the word 'sex' is spoken way too many times in the trailer.

It can be safely interpreted that Kartik Aaryan isn't too fond of experiments. We say so because despite having spent eight years in the industry, he ends up doing the same role, in almost all his movies. Moreover, his acting also seems to have weaken overtime. Also, tragically, the talented Bhumi has been given little screen time, as is evident from the trailer.

Another remake, another remixed song. My goodness. The new Pati, Patni aur Woh trailer was a complete fiasco to be honest. Kartik Aaryan's craft hasn't changed one bit. Same mini monologue with the same tone. He's been typecasted for sure. #PatiPatniAurWohtrailer #PatiPatniAurWoh

Pati Patni Aur Woh is slated to release on December 6. It will clash with Ashutosh Gowarikar's much-hyped period drama Panipat, which is based on the historical third battle of Panipat. The ambitious project stars Arjun Kapoor, Sanjay Dutt and Kriti Sanon in lead roles.