Here's dissecting the trailer of 'The Sky is Pink' 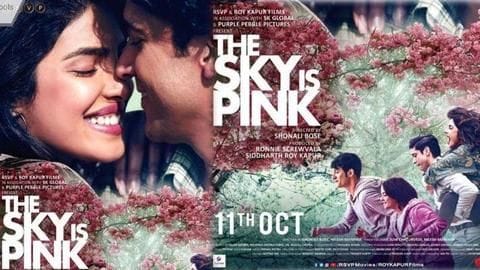 The trailer of The Sky is Pink hit YouTube today, and within a few hours, the three-minute-long clip got viewed over 1L times. The film that marks the return of Priyanka Chopra Jonas to Bollywood after three years showcases the story of Aisha, who became a motivational speaker after being diagnosed with pulmonary fibrosis at 13. The film has been directed by Shonali Bose.

The trailer starts with Aisha, played by Zaira Wasim, saying that she has seen many love stories, but her most favorite, "if a little tragic," is the one that is between Panda (Farhan Akhtar) and Moose (Priyanka), her parents. It then goes on to show the starting of their warm, sassy and passionate affair, and spans across a period of 25 years.

All was going well till Priyanka's character gives birth to a daughter, Aishi. "I'm the villain making this love story tragic," says Aishi in the backdrop, while the clip shows Zaira coming out of a door. The next few scenes in the trailer shows her getting diagnosed with a serious immune deficiency, and how her parents are struggling to save their daughter, and marriage.

The trailer keeps you engaged till the end, and every scene has a punch in it. Zaira's character has been described as "sassy, sardonic, spunky," and we get ample glimpses of the same. For instance, in the end, we see her asking her mother, "When did you and dad first do it," a question that makes Priyanka's character stumble, literally and metaphorically.

Interview
'The Sky Is Pink' is a story of hope: Priyanka

After watching the trailer, expectations from the film are high. Priyanka, who is co-producing the film with Ronnie Screwvala and Siddharth Roy Kapur, knows this, and said that she's "proud to be a part of making a film like this." "The Sky Is Pink is a story of love and hope, and I think that it'll resonate with everyone at some level," she said.

Quote
"Knew playing Aditi Chaudhary was going to be challenging"

"We've all faced loss and this movie shows us how to celebrate the life of your loved one, instead of mourning their death. I knew playing Aditi Chaudhary was going to be challenging and portraying her journey on screen has been really special," she said.

Release
'The Sky Is Pink' is slated to release in October

Meanwhile, Farhan, who is playing Niren Chaudhary, said that he's grateful for being a part of this film, doing which was both fun and emotional. The Sky Is Pink has been shot in Delhi, Mumbai, London and the Andamans. While the dialogs have been written by Juhi Chaturvedi, Pritam Chakraborty has composed its music. The film is slated to release on October 11.

Achievement
'The Sky Is Pink' to premiere at Toronto Film Festival

The Sky Is Pink will also be premiered at the prestigious Toronto International Film Festival on September 13. Before flying off to Toronto, Priyanka shared a still on Sunday that shows Farhan holding her in his arms. "Made with love and so much more!" she captioned it, while Farhan wrote, "TheSkyIsPink was made with not just hard work but with a lot of love."