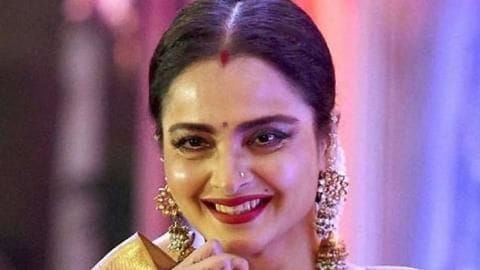 On Thursday, fans were in for a sweet surprise as veteran actor, the iconic and ever-charming Rekha made her television debut with an upcoming Star Plus serial's teaser. A fresh promo video for the show, Ghum Hai Kisikey Pyaar Meiin, featuring Rekha, has been doing the rounds on social media, and obviously nobody can keep calm! Here's more on this.

Donning a beautiful golden and red-colored saree, Rekha looks mesmerizing as always. She starts the promo clip by crooning the song, "Gum Hai Kisike Pyaar Mein, dil subha shaam," from her own 1972 film Raampur Ka Lakshman. The original song was voiced by Lata Mangeshkar and Kishore Kumar and was pictured on Rekha along with Randhir Kapoor.

Details
She tells why the song is special to her

Further, in the clip, Rekha tells the audience the song is close to her heart as, "one has expressed their love, but does not have the right to openly talk about it." "Jab dil kisi ke pyaar me subah shaam ghum rahe, toh mohabatt ibadaat ban jaati hai," she adds before introducing us to the characters of the upcoming soap opera.

#breaking Rekha'big televison debut and major comeback. First on @viralbhayani Gorgeous Veteran Actress Rekha spells magic on the small screen. Here’s an exclusive video of the Diva mesmerizing the audiences with her timeless charm for the upcoming TV show ‘Ghum Hai Kisikey Pyaar Meiin’ on Star Plus! Wondering what will be her role in the show? Let’s wait and watch #StarPlus #GhumHaiKisikeyPyaarMeiin #Rekha #viralbhayani @viralbhayani 📽 @starplus

However, it is not clear whether Rekha is only part of the promo video or will have an extended role in the serial. Rekha, who started her acting career as a child artist in 1950s, has featured in movies such as Nagin, Khubsoorat, Umrao Jaan, Silsila, Khoon Bhari Maang, and many others. She was last seen in the 2015 movie Shamitabh.

Show
The show will premiere on October 5

Ghum Hai Kisikey Pyaar Meiin stars Neil Bhatt in the lead role of Virat, an IPS officer torn between his love and his wife, who he is forced to marry out of "duty." The show revolves around the emotional dilemmas of three characters. It will be premiered on Star Plus on October 5 at 8 pm, replacing Kasautii Zindagii Kay 2 from that slot.