'Rick and Morty' producer teases 'epic' movie on the cards?

While Rick and Morty continues to blow our minds with its quirky and philosophical take on science, looks like fans are in for a special treat. Producer Scott Marder and show star Spencer Grammer recently spoke about the possibility of a spin-off movie, and we are here for it. The hit animated series follows the lives of a genius scientist and his not-so-bright grandson.

Information
Show producer says 'a movie would feel like a trilogy'

Marder shared the team will need to up the ante when it comes to movies. "It'd be daunting. I wouldn't be shocked if there was one that comes down the pipeline someday," he teased. "I feel like every episode is a movie. A movie would feel like the equivalent of a trilogy. We just pack so much in. It'd have to be pretty epic."

Details
'It'd have to be something big,' Grammer says about movie

Meanwhile, Grammer weighed in, and said, "It'd have to be something so big. It'd have to be a 3D, interactive movie that also has a theme park. I don't know if you can do a straight movie." Marder says Rick and Morty movie will happen, and likely be an animated one. Grammer also joked, "They better hire someone really good to play Summer."

Apart from that, a Rick and Morty spin-off series is also headed our way. It'll focus on the superhero group The Vindicators, who showed up in season three. "Answer the Vindibeacon and join your old pals Supernova, Vance Maxiumus, Alan Rails, Crocubot, and Noob Noob as they fight crime, avert genocides, and yuk it up without Rick and Morty," the official synopsis reads.

Future
Season five is coming sooner than we thought 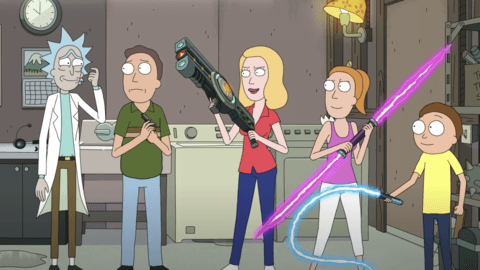 While season five plot details have been kept under wraps, expect the duo to go on more such intergalactic adventures. Watch out for Space Beth as well, as the show's clone anecdote will definitely continue in the upcoming season. Season five is coming to Adult Swim on June 20. Regular cast members Justin Roiland, Sarah Chalke, Chris Parnell, and Grammer are all coming back.

Success
'Rick and Morty' has won multiple awards, including Emmys

Not only is Rick and Morty a fan-favorite show, it also has won top honors at the Emmy Awards. The series won Emmy's Outstanding Animated Program twice in 2018 and 2020. In 2017, Rick and Morty's third season was confirmed as the most-watched series in Adult Swim history. The show became so successful that almost 70 new episodes were officially ordered in May 2018.