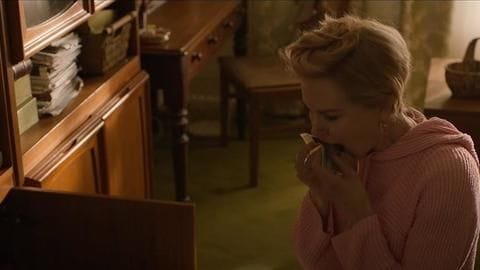 Nicole Kidman is leading the upcoming Apple TV+ anthology series Roar and looks right in her element in its recently released trailer. The trailer of the series—based on short stories by Cecilia Ahern—hints at "darkly comic" feminist tales in each of the eight segments. It seems to be a perfect blend of elements like humor and heartfelt emotions. Here's our breakdown of the trailer.

Context
Why does this story matter?
Trailer
What is in store for us?

The trailer of the Apple TV+ series opens with Kidman eating photographs. We get to see surreal mysteries revolving around the other characters of the series as well. While Issa Rae seems to be "invisible" to men, Betty Gilpin is a trophy wife for her husband—quite literally. Alison Brie is a ghost—who is puzzled why she is getting cramps even after becoming a ghost.

Facts
Meet the other cast and crew of the series

Actors including Cynthia Erivo, Merritt Wever, Meera Syal, Fivel Stewart, Kara Hayward, Daniel Dae Kim, and Alfred Molina, among others, play prominent roles in the series. Gearing up for a premiere on April 15, Roar has Bruna Papandrea, Steve Hutensky, and Allie Goss on board as its executive producers on behalf of Made Up Stories. The show is produced for Apple by Endeavor Content.

The official press release of the Apple TV+ series read, "Roar is an anthology series of darkly comic feminist fables." "Spanning genres from magical realism to psychological horror, these eight stand-alone stories feature ordinary women in some pretty extraordinary circumstances," it added. "In Roar, women eat photographs, date ducks, live on shelves like trophies. And yet, their struggles are universal," the note further stated.