Remember the 1994 release Andaz Apna Apna, starring superstars Salman Khan and Aamir Khan? The movie has since been one of the cult classics ever made in Bollywood. And now after 25 years of its release, writer Dilip Shukla has confirmed that its much-awaited sequel is in the works. He has also mentioned that Salman-Aamir would be reuniting for the sequel. Here is more.

Reunion
Salman and Aamir to reunite after a stunning 25 years 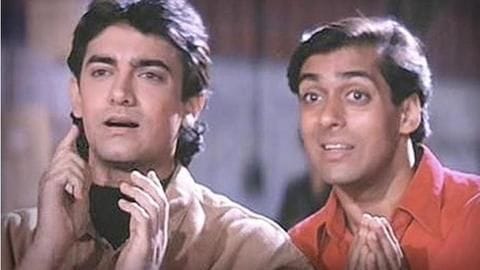 Talking about it, Dilip stated that he is still working on the script and that it's quite a challenge for him. Interestingly, this movie will mark Salman-Aamir's reunion after 25 years. They were last seen in Andaz Apna Apna itself. "The sequel cannot be complete without Salman-Aamir. They will be there along with three other new cast members," Dilip highlighted.

Apart from Amar-Prem aka Aamir-Salman's perfect comic flair, the sequel will, reportedly, also have a comeback of the iconic character of Crime Master Gogo. Originally played by Shakti Kapoor, Crime Master Gogo will be portrayed by a "contemporary actor and his character will be more stylized and modern". The movie will be set in 2019 and is expected to be a massive laughter riot.

Speculations
Ranveer, Varun, Ranbir were being thought of for the sequel

Notably, speculations about Andaz Apna Apna's sequel and its cast have been rife for a while now. It was reported that actors Ranveer Singh and Varun Dhawan have been approached to portray the happy-go-lucky characters of Amar and Prem in the sequel. Meanwhile, Ranbir Kapoor's name was also doing the rounds for the movie. However, no official announcement has been made so far.

Support
Aamir also vouches for Ranveer, Varun for the sequel

Aamir has also vouched for Ranveer-Varun for the sequel. "Andaz Apna Apna is a film that people have loved immensely, so I'm sure they would love to see it. As an audience, I'd love to see what Ranveer, Varun or any of the young actors would do with the characters," Aamir said. Ranveer-Varun have good comic timing, so they might be a good choice.

Eagerness
Ranveer is keen to be a part of the sequel

Meanwhile, Ranveer is keen to be a part of the sequel. In fact, he also expressed his desire to be a part of the cult-classic while interacting with a fan on Twitter. However, he further mentioned it will be quite difficult to live up to the expectations of the cult movie because "you've got a big responsibility as it's one of those timeless comedies".