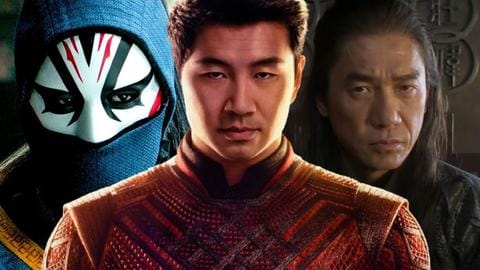 Marvel has finally dropped another highly-anticipated trailer of Shang-Chi and the Legend of the Ten Rings. It is the origin story of Marvel's first Asian superhero, Shang-Chi, who finds it difficult to accept his family legacy. Meanwhile, his father Wenwu/The Mandarin is determined to bring his son to his Ten Rings terrorist organization. Whether Shang-Chi accepts his inheritance or not is the movie's plot.

Story
What is the trailer about?

The trailer begins with Wenwu telling Shang-Chi, "Throughout my life, the Ten Rings gave our family power." He's then seen training Shang-Chi, who follows the path till he's a teenager. But later, Shang-Chi is seen leading a normal life in a city with a different identity. Soon, Wenwu tries to push him (literally!) to join his mysterious organization and take over the family legacy.

Antagonist
Is Wenwu the real villain in the movie?

Does The Mandarin ring a bell? A glimpse of The Mandarin/Wenwu's Ten Rings terrorist organization was shown in Iron Man (2008). Now, in Shang-Chi, his tactics to make his son like him hints that Wenwu is the antagonist of this movie. In the trailer, his image has been shown in a negative light and Shang-Chi's dialogue proves it—"But I can never escape his shadow."

Information
Trailer is full of action, but has 'Doctor Strange' vibes

Shang-Chi promises to be a fantastic action-packed movie. The trailer shows thrilling fighting scenes with great visuals. Well, it's a Marvel movie, so the scenes have to be outstanding. However, it gives a Doctor Strange vibe in some scenes—from Shang-Chi's posture before the beginning of the fight to water floating in the air. Interestingly, Benedict Wong will reprise his Doctor Strange character in it.

Cast
Who are the talented actors in 'Shang-Chi'?

Directed by Destin Daniel Cretton, the Marvel movie is set to hit worldwide on September 3. But it's "coming soon" for India due to the ongoing pandemic situation. Also, it will release in six languages: English, Hindi, Tamil, Telugu, Malayalam, and Kannada. The movie has many talented actors like Simu Liu (Shang-Chi), Tony Leung (Wenwu), Awkwafina (Katy), and Michelle Yeoh (Jiang Nan), among others.