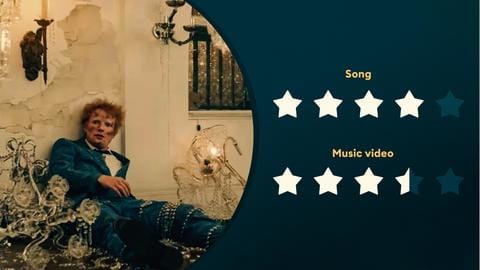 After releasing Bad Habits in June, Ed Sheeran is back with another single Shivers, both of which are actually part of his upcoming album = (Equals), set to arrive on October 29. Donning literal feathers and eccentricity, the English singer presents a whole love story in the video featuring various cliche rom-com elements like the meet-cute or the street brawl. Here's our review.

Sheeran had promised, while turning blond for Bad Habits, that he'll never ditch his ginger hair again. And he keeps it. The MV stars Sheeran alongside AnnaSophia Robb, as we see them falling in love following a meet-cute at a cafe. But this summary hardly justifies the video that comes with a lot of weirdness. Robb turns into Thomas (the train) once, for example.

Song
We're looking at another masterpiece from the 'Photograph' crooner

As for the tunes, Sheeran is a magician when it comes to composing completely different forms of music and still retaining his flavor. With a lot of clapping, scatting, and soft melody, Shivers feels like a mellowed-down version of Shape of You, but certainly not in an inferior way. The chorus is extremely catchy and we have another trendy masterpiece in our hands.

Announcing the second single, the Perfect crooner had said Shivers was "originally meant to be the first single but I just didn't see a world where Bad Habits existed if it didn't come out in the summer. Shivers always felt more autumnal." Tagging the track as "too special to get wrong," Sheeran had shared how he had written Shivers in just three days.

While the song is a straight-out winner, the music video is a bit too eccentric for my liking. The safe bet would be to catch the track on any music streaming platform. Sheeran's upcoming fourth studio album, =, contains 14 tracks and he had released the audio for Visiting Hours earlier. Verdict: The song gets 4/5, while the music video receives 3.5/5 stars.