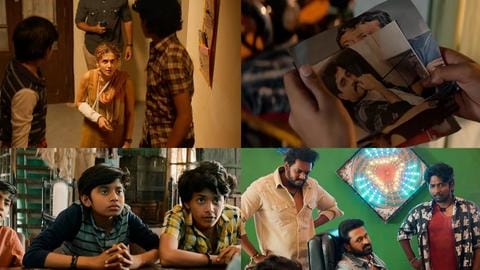 Mishan Impossible finally gets a trailer! Starring Taapsee Pannu, the Telugu film will release on April 1, and before that, superstar Mahesh Babu unveiled its trailer. Sharing the same, he wrote on Twitter, "A fun and refreshing trailer!! Looking forward to the film! Wishing the entire team of #MishanImpossible all the best!" And, the trailer is indeed fun, but Pannu's appearance didn't have weight.

Trailer
What is in store for you?

The trailer, lasting 3:03 minutes, begins with action montages and Pannu launching a search operation. It progresses to show three kids, funnily named Ragupathi, Raghava and Rajaram, claiming to be the "original superheroes," as against "fake" ones like Hulk, Captain America and the like. The twist happens when they start their hunt to nab Dawood Ibrahim to win a reward money of Rs. 50L.

Observation
What else did we see in the trailer?

The trailer has ample humorous references to films like RRR, KGF, Baahubali and that's what makes it amusing. As far as Pannu is concerned, we don't see many shades of her character. Her role seems limited to the search operation only. It has been written and directed by Swaroop RSJ (Agent Sai Srinivasa Athreya fame), and co-stars Harsh Roshan, Bhannu Prakshan, and Jayateertha Molugu.

Details
These are the best takeaways from trailer

Deepak Yeragara's camera angles, the different colors used to signify various emotions, and the sound design by Nagarjun Thallapalli are the best takeaways from the engaging trailer. Also, could you catch the flash of Muthu Pandian of The Family Man season 2, Ravindra Vijay? From the backdrop and his get-up, it seems that he is playing an officer of the law (again!)

To note, Mishan Impossible is Pannu's 15th Telugu film and will reportedly see her play the character of an independent journalist. This film also marks her comeback to Tollywood after the 2019 film Game Over and is a homecoming of sorts, as she had started her film career with a Telugu movie. Niranjan Reddy and Anvesh Reddy have produced the film via Matinee Entertainment.