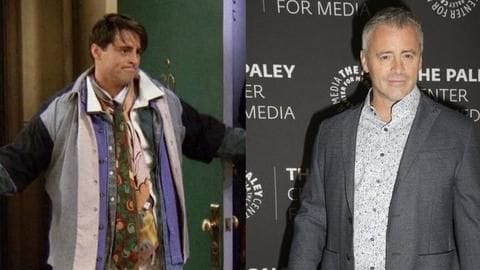 It's hard to believe that F.R.I.E.N.D.S, our all-time favorite TV sitcom first aired 24 years ago on September 22. And, you are shocked when you realize the characters are now over 50 years. As if to remind it, 51-year-old Matt LeBlanc a.k.a Joey Tribbiani, recently revealed in a talk show that when a teenager saw him, he thought Matt was Joey's father.

In an episode of popular talk show Live With Kelly and Ryan, the hosts- Kelly Ripa and Ryan Seacrest - spoke to Matt how an entirely new generation has started to watch the show, courtesy Netflix. Matt agreed with the duo, saying he finds it unbelievable how every year a new set of young people watch the series for the first time.

'Scram'
Matt gives an epic response to the kid

Matt then revealed an interesting story. He shared, "I was walking down the street one day- this was a few years ago- and this kid, must have been 13 or 14, he's like, 'Oh my god, You're Joey's dad.'" Matt, obviously startled in a good way, gave an epic one-word response. "My response was 'Scram!' That's what an old guy says," he laughingly added.

Business
What Netflix paid to keep 'F.R.I.E.N.D.S' on its platform?

It seems like Netflix paying a hefty amount to keep F.R.I.E.N.D.S on its platform is bearing results. After fans got angry when they came to know that F.R.I.E.N.D.S would no longer be available on Netflix, the latter decided to keep it. The streaming giant signed a multi-year contract with Warner Bros Media, the makers of F.R.I.E.N.D.S, priced around $70-80mn (Rs. 496-567cr) in 2019 itself.