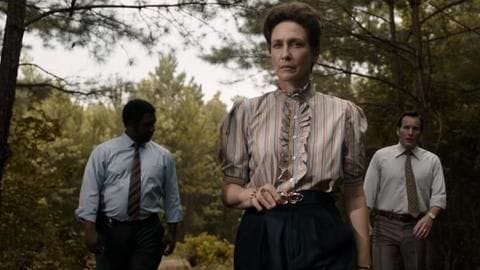 Looks like the Devil is back and, this time, even scarier. Paranormal investigators Ed and Lorraine Warren are returning for the third The Conjuring movie, and they are going to prove that evil spirits are real in a court of law. Titled, The Conjuring: The Devil Made Me Do It, the movie will focus on the real-life story of the Arne Cheyenne Johnson trial.

While the trailer isn't all that scary with the usual ghostly figures, it does manage to bring in the chills. The patient who sings Color Me Your Color, Darling is just sheer creepiness. The final scene of the trailer is extremely well-shot, with a spine-tingling jump scare we didn't expect. It reveals Lorraine getting possessed, which means the spirits aren't sparing the ghosthunters either.

Story
'The Conjuring 3' is based on a real-life incident

The story revolves around Johnson, who was accused of murdering his landlord in 1981. He had told the court that he was possessed by a devil, while committing the crime. It's now up to the Warrens to prove demons exist, that too legally! Notably, it's the first documented case in US, where the defense used demonic possession to seek innocence during a murder trial.

Details
Cast, release date and other details of the horror film

Patrick Wilson and Vera Farmiga will reprise their roles as the paranormal investigators, while Sterling Jerins will return to play daughter Judy. Other cast members are new to the franchise. The movie is directed by Michael Chaves, of The Curse of La Llorona fame. The Conjuring 3 has already released in the UK on May 26, while it hits theaters and HBO Max tomorrow.

Trivia
Here are some interesting facts about 'The Conjuring Universe'

For the first time, James Wan is not directing a Conjuring movie. The Conjuring Universe is considered the largest horror franchise in cinema history, with 10 films (two currently in the works). The box office collection of the entire franchise is estimated to be around $1.8 billion worldwide. In April, DC Comics had also collaborated with The Conjuring Universe for a new horror imprint.