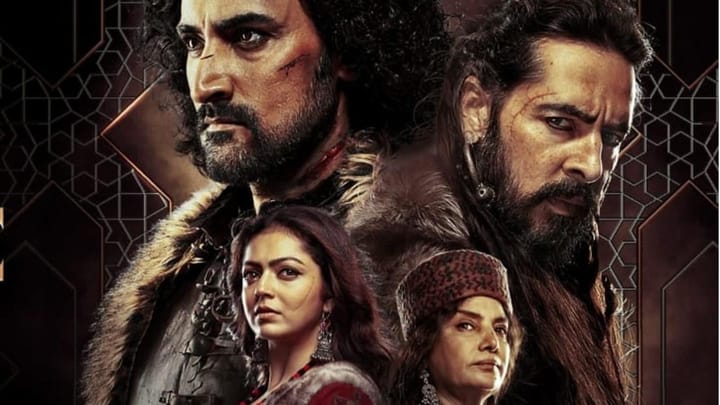 Disney+ Hotstar has just dropped the trailer of Nikkhil Advani's The Empire, and it looks epic. Starring Kunal Kapoor as Zahir ud-Din Muhammad Babur, the eight-episode series is about the Mughal emperor's search for his kingdom "from the valley of Ferghana to Samarkand and beyond." It also stars veteran actress Shabana Azmi, handsome hunk Dino Morea, and TV star Drashti Dhami in pivotal roles.

At the beginning of the video, a huge battleground is shown. Kapoor is then heard saying he has been escaping death since he was a 14-year-old, but now he doesn't know what to do next. To protect his kingdom's future, he approaches his dangerous rival Shaibani Khan, who demands Babur's sister Khanzada in return for his help. Then, Babur decides to defeat Lodhi's kingdom.

This show is said to be "India's first-ever digital magnum opus" and it's true. The trailer gives a glimpse of the grand sets and locations where epic battle sequences have been shot. It's rare to see such a massive scale of production in a web series in India, which has the appeal of Padmaavat and Baahubali. And their attires have a Game of Thrones touch.

Dhami shines as Khanzada in this historical fictional story

Kapoor has proved his acting skills since his Rang De Basanti days, and as Babur, he looked fierce and performed battle scenes wonderfully in the trailer. Azmi is as graceful as always, while Morea's performance as the antagonist is something that can be admired after watching a few episodes. Dhami, however, nailed it as Khanzada in the video with her expressions and dialogue delivery.

'The Empire' is set to premiere episodes from August 27

Based on Alex Rutherford's novel Empire of the Moghul, the series's first season will be inspired by its first volume, Raiders from the North, out of all six. The Empire is set to stream on Disney+ Hotstar from August 27. Produced by Emmay Entertainment, it will be directed by Mitakshara Kumar, who has earlier worked as an associate director on Bajirao Mastani and Padmaavat.

Share this timeline
Facebook
Whatsapp
Twitter
Linkedin
Sushmita Sen
Twitter
I proudly call myself a movie buff and can re-watch shows like F.R.I.E.N.D.S, Harry Potter, and Vampire Diaries for the 100th time. 'Do what you love' is my motto and thus, happily working as an entertainment/ lifestyle reporter and content writer since 2014. Currently, I am a part of the entertainment team at NewsBytes.
Kunal Kapoor
Kunal Kapoor
Expecting the expected is boring: Ashwiny on 'Ankahi Kahaniya' Netflix
Disney+ Hotstar invites wrath of netizens over 'The Empire' Kabir Khan
Want to do interesting films as opposed to popular: Kunal Mumbai
'Ankahi Kahaniya' trailer presents unconventional tales of love and longing Netflix