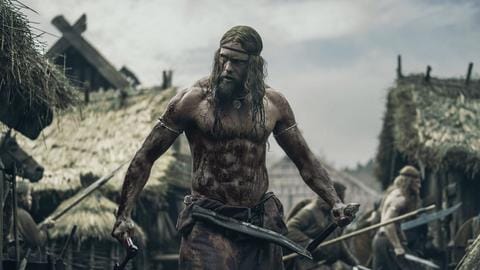 Ahead of its theatrical release next week, Focus Pictures dropped the second official trailer for the Hollywood action thriller, The Northman recently. The third feature from filmmaker Robert Eggers, this multi-starrer focuses on the revenge-seeking life journey of a Viking prince. While the first trailer gave us an outline of the plot, the second one simply enhances curiosity with splendid visuals. Here's a breakdown.

Context
Why does this story matter?
Trailer
Prince Amleth will seek revenge for father's murder

"Fate has no mercy," the cruelty of the Viking tale gets featured in the two-minute clip as a hut full of people is lit on fire. Massively built Alexander Skarsgård's Prince Amleth's story is then shown through fleeting sequences. After witnessing the murder of his father, King Aurvandill (Ethan Hawke), by his uncle Fjölnir (Claes Bang), little Amleth flees only to return for revenge.

Information
Who else are in the cast?

Apart from avenging his father, Amleth also has to save his mother, Queen Gudrun (Nicole Kidman). He'll be aided in this mission by Anya Taylor-Joy's Olga. Icelandic singer-songwriter Björk and Willem Dafoe will also essay pivotal characters. Eggers has also co-written the film, with Jarin Blaschke helming the picturesque cinematography. The Northman will exclusively release in cinema halls on April 22.

It is unclear whether the film will hit Indian theaters on the same date as well. But if it does, The Northman will have to compete for eyeballs with two Hindi movies, also premiering on the same day. The first one is Shahid Kapoor's much-anticipated sports drama Jersey, which got pushed back a week recently. Neeraj Pandey's thriller Operation Romeo is the other one.