'The Office' cast just reunited for an online wedding 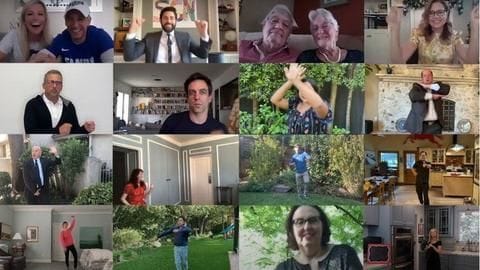 Even after seven years of its conclusion, The Office continues to spread smiles in the lives of people. And, the beloved sitcom did it again when nearly its entire cast reunited for a virtual wedding on John Krasinski's hit new web series Some Good News (SGN). Krasinski, who played Jim Halpert in the iconic show, officiated the impromptu wedding, and it was a blast!

Information
By the way, what is 'Some Good News'?

Some Good News is a new YouTube series created and hosted by John Krasinski. The news show focuses entirely on "good news" coming from around the world during the COVID-19 pandemic. Debuting in late March, the SGN YouTube channel has already garnered 2.29 million subscribers.

During its latest and seventh episode, Krasinski invited a lovely couple, Susan and John, who were set to tie the knot. But the host decided to fast-track the process a bit. And fun fact: John's actual marriage proposal to Susan was heavily inspired by Jim Halpert's proposal to Pam Beesly (Jenna Fischer) in The Office, where he proposed her outside a gas station store.

But of course, no wedding is complete without family and friends. So, Krasinski went ahead and connected the couple's parents and best friends on the group video chat. That wasn't it, the host then invited his co-star from The Office, Jenna Fischer. After the bride complimented the actress, Jenna said, "It is your wedding day! I had to get dressed up."

This was followed by a live performance by none other than Zac Brown. Thereafter, Krasinski, who said he recently got ordained, pronounced John and Susan as husband and wife. The couple then went ahead and kissed each other. But no party is complete without some fun, right? Hence, Krasinski invited his "family" for the ceremony, which was, of course, the cast of The Office.

Cast
'It doesn't get better than this'

And then, Steve Carell, Rainn Wilson, BJ Novak, Ed Helms, Mindy Kaling, Kate Flannery, Oscar Nunez, Angela Kinsey, Phyllis Smith, Creed Bratton, and Brian Baumgartne, all joined in and showed off their moves to entertain the newly-weds. Signing off, Krasinski said it would be the "first and only SGN wedding. Because let's be honest, how does it get better than that? It does not."