#ThugsOfHindostan or Indian Pirates of the Caribbean? Can't figure out 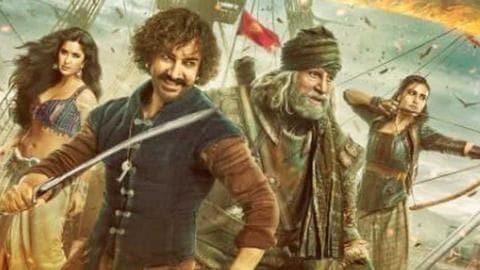 'Thugs of Hindostan', the highly anticipated big-budget film, has dropped its first trailer. It stars Amitabh Bachchan, Aamir Khan, Katrina Kaif and Fatima Sana Shaikh. Notably, this is the first time Amitabh and Aamir would share the screen space. Directed by Vijay Krishna Acharya of 'Dhoom 3' and 'Tashan' fame, the film will release on November 8. Here's the dissected version of the trailer.

Do you know?
The true source material

'Thugs of Hindostan' draws its source material from the 1839 novel, Confessions of a Thug, written by Philip Meadows Taylor. The story follows a clash between the freedom-loving pirates of India and the colonizing British East India Trading Company.

Trailer story
What does the trailer show?

The 'Thugs of Hindostan' trailer showcases amazing visuals, naval warfare, and the clash between two ideologies - one seeking freedom and the other seeking to subjugate freedom. The former is personified through Amitabh Bachchan's character, incidentally named Aazad. As the pirates pose a threat to the Company's authority, the antagonist Clive, hires Firangi Sailor, a treacherous pirate played by Aamir Khan.

Amitabh & Aamir
The stars that draw the spotlight

Goes without saying, Bollywood legends Amitabh and Aamir drew attention. The scenes they share have an undercurrent of tension, the dialogues are impactful. The trailer shows three scenes where the two are together and promises some excellent action sequences between Aazad and Firangi. Since the trailer establishes Aazad has a trusting disposition while Firangi is perpetually suspicious, their ideas might clash in the story.

Information
The other stars who deserve our attention

Katrina Kaif plays a dancer Suraiyya in the film. Fatima Sana Shaikh of 'Dangal' fame, plays Zafira, a fiery archer who is part of the thug group Khudabaksh, led by Aazad. The inclusion of a female pirate, speaks to the inclusive nature of rebel groups.

There's no denying that 'Thugs of Hindostan' is a big-budget movie. The visuals are mind-blowing. From naval warfare, where ships explode in cannon fire, to battles between the pirate and British armies, the trailer promises that the film will be great to watch on big screens. As Bollywood begins to emulate Hollywood's degree of visual mastery, our films might be headed in exciting directions.

Jack's influence
Firangi Sailor reminds us of a beloved pirate

Aamir Khan plays Firangi, whose character traits are eerily similar to Johnny Depp's Captain Jack Sparrow, in 'Pirates of the Caribbean'. Firangi loves his alcohol, has a tendency to speak in confusing riddles or jumbled sentences, and is a self-proclaimed 'bastard' who will do anything for money. The resemblances between Sparrow and Firangi are unmissable, and definitely not in Aamir's movie's interest.

Inspiration
The familiar theme of pirates versus East India Company

The theme of a port town taken over by the EIC, where they establish an authoritarian rule and exploit villagers, is similar to 'Pirates of the Caribbean: At World's End'. A group of rebellious pirates uniting against the authoritarian rule is also reminiscent of the pirate lords uniting to fight the British. Despite plot similarities, the movie might hit the chords right.

India's struggles
A fight close to our hearts

Though the movie seems to draw inspiration from 'Pirates of the Caribbean', the fight for freedom against the British hits close to home. India, which was colonized by the EIC, still bears the scars of the exploitative occupation. The courage shown by the thugs, in the film, refusing to bow down to authority is inspiring. This, coupled with excellent visuals, promises a successful movie.