Why should we ignore Bollywood babas? 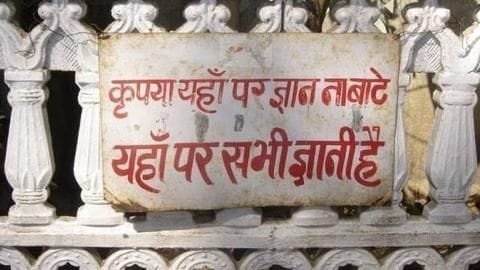 Have you seen Elon Musk, Tim Cook, Ratan Tata giving people marital advice on Twitter? Or Sachin Tendulkar talking about how to raise funds from a venture capitalist? Exactly. Experts share their wisdom on topics they have a formal degree on or professional experience in. While everyone has freedom of speech in this country, why should we listen to Bollywood babas' gyaan on social issues? We shouldn't, and here is why.

Do you know?
But, why are we talking about them today?

We are talking about them today as the award wapsi gang is back, with their selective rage. After SRK and Aamir, now Naseerudin Shah feels this country is unsafe for his kids. Soon after, in his self pity mode, he said he was "expressing concern."

Reason No. 1
To begin with, their own industry is regressive

Bollywood defines regressive attitude for most of us. It is the only surviving industry which is going back in time. Homophobia and transphobia are funny in their world; stalking is still mainstream; 'No never means No' for the Bollywood hero, pelvic thrusts are considered cool; A-grade actors do item songs (On another note, why do they even call it an item song?) And, off screen, they feed on servitude.

Reason No. 2
Casting couch, objectification of women, unequal pay: You name it

Their problems are so humongous, and their solutions are juvenile. Everyone knows about casting couch in Bollywood. Their solution: they deny that it exists. Women are paid substantially less than men in their industry. Their solution: Put women's name before theirs in credits. They have been objectifying every body part of women since time immemorial. Their solution: Leave it, even they can't defend it.

Reason No. 3
Some of them are highly nauseating

What baffles any sensible Indian is the level they stoop down to, just to win an argument with an Average Joe on Twitter. To specifically quote a few names, here is the list of the most vile ones: Javed Akhtar, Swara Bhasker, Shruti Seth, Vishal Dadlani. One ends up wondering, do they talk like that even off Twitter? Why are they so angry, and why do they bring religion in every conversation?

Reason No. 4
Their rage is selective

As influential celebrities, they should definitely raise their voices, if some issues bother them. They should engage in meaningful conversations, even vent out their frustration. (After all, if you are a part of a regressive industry, it is understandable that you will be irritable) But, why do they raise their placards on some issues and go silent on others? Why do they write open-letters when their movies are about to be released? And, when you call out their bluff, the cycle of abuse starts.

Do you know?
What should we do instead?

Their only job is to entertain us, and we should let them do that. We should not disturb them on Twitter. In the spare time that they would get, perhaps they can hone their craft and can eventually entertain us better.