Home automation is an emerging market in India, and has a long way to go before it can become mainstream. Given the relatively nascent stage the market is in, quality smart home solutions are hard to find, or are often prohibitively expensive. However, Pranjal Kacholia, a 3rd year IIT-Delhi student, has plans to change that with his indigenous, cost-effective smart home solution. Here's how.

Speaking to NewsBytes, Pranjal said that his journey began a couple of years back, when he found a glaring problem. Pranjal was looking for smart home solutions in his hometown of Kota, Rajasthan, when he found that vendors were quoting as much as Rs. 8 lakh for home automation. He immediately realized that customers were being overcharged, and that there was an opportunity.

With the idea of changing the smart home market in India, Pranjal teamed up with four other engineers who had made forays into this space earlier, and founded Eden Smart Homes in July 2017. Within a year, Pranjal and co. had managed to come up with an indigenously-built, hi-tech smart home solution, that was not just cost-effective, but also designed for India in particular.

Overview
An overview of Eden's product

Eden's solution involves installing small hardware modules behind switchboards which allows all appliances in a house - from fans and lights to ACs and geysers - to be controlled via a smartphone app. The best part? Eden offers a retrofit solution that essentially means older wiring, appliances, and switchboards do not have to be changed. Further, unlike many other smart home solutions, there is no central hub. 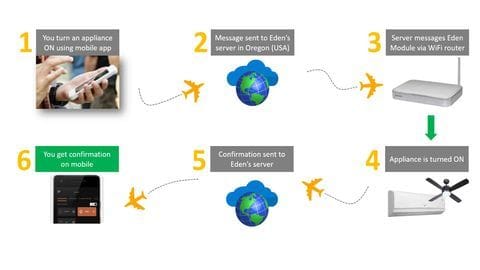 These Eden Smart Modules take a mere 15 minutes to install. Once installed, the modules connect with a house's Wi-Fi router and offers smart home functions via a mobile app. When you give a command to turn on/off an appliance, the Wi-Fi router relays the message to the concerned module. Commands can be issued remotely from anywhere. Users also get push notifications when appliances are turned on/off.

Other features offered by Eden's solution include monitoring power consumption, the ability to view real-time status of appliances, scheduling on and off times for appliances, creating custom scenarios, one-button control of the entire smart home etc.

Notably, Eden's smart home solution offers several advantages. Apart from costing a fraction of similar global products, the Eden Smart Module, as it is called, also eliminates other potential problems. By eliminating the need for a central hub, Eden ensures that failure of one module does not affect the entire smart home's functioning. Further, push notifications can also serve as security alerts for unauthorized use of appliances.

Information
So, how much would automating a home cost?

Eden Smart Home's solution is also considerably cheaper than alternatives offered by other global brands. For perspective, Pranjal told us that fully automating an entire 3 BHK apartment would cost just Rs. 90,000, compared to several lakhs for solutions by other brands.

Future plans
What Eden has planned for the near future

As it stands, Eden Smart Homes has received backing from the government's StartUp India program, and is awaiting patents for its technology. Eden is also partnering with builders in Delhi, and has demo modules installed in some flats made by big builders. Further, Eden is in talks with distributors across India to create a pan-India reach as it looks to scale up production.

Do you know?
It's a great time to be in the IoT business

Given Eden's innovative approach and the price-sensitive nature of the Indian market in general, it could stand to gain a lot from the emerging IoT market in India, which is slated to hit $15bn by 2020.