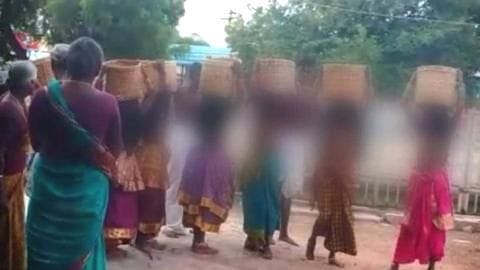 Coimbatore-based news website, Covai Post, published a story on the bizarre, "ancient" ritual performed in a temple in Madurai's Vellalur involving half-naked girls. Girls aged 10-14 are forced to live bare-chested inside Yezhaikaatha Amman temple for a fortnight, covering their upper-body with only jewelry and flowers. Covai Post's Editor-in-Chief, Vidyashree Dharmaraj, received hundreds of threatening calls after the article was published. Know more!

Madurai (TN)-Minor girls take part in ritual at Yezhaikatha Amman temple,which include staying at temple bare-chested for a fortnight (25.9) pic.twitter.com/9Fnm9E4z8V

Details
Girls are willingly left inside temple by their parents

According to the tradition, seven half-naked girls, under a priest's supervision, are offered to the deity for a fortnight. Every year in the Tamil month of Aavani, girls from 62 villages are paraded before the priest, who "selects" seven of them. The girls only tie a silk cloth around their waists; on the festival's last two days, they wear flowers/jewelry on their torsos.

Information
Administration swings into action to probe the issue

After Covai Post published the article on the tradition at the Vellalur temple along with a video, Madurai Collector reportedly sent a team to investigate the bizarre practice. However, no evidence of sexual abuse/harassment was found inside the temple.

As soon as the news spread that Covai Post's story prompted Madurai district administration's visit to the temple, the news website began receiving threat calls, hate calls, and abuses. Covai Post's Vidyashree Dharmaraj and senior journalist AR Meyammai (who reported the story) were targeted. Dharmaraj lodged a police complaint in Coimbatore, mentioning all the phone numbers she had been receiving such calls from.

Editor-in-Chief of Covai Post, Vidyashree Dharmaraj, stated: "I had to switch off my phone as there was a volley of life threats and several hate calls ever since we posted the story and Madurai district administration reached the spot to probe."