Decoding the 3 levels of Intellectual Mafias 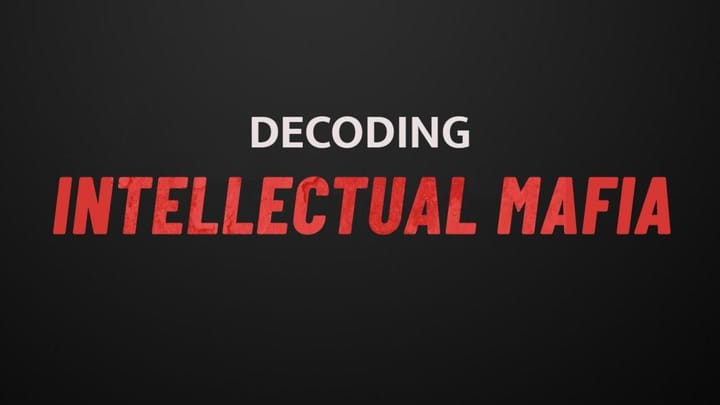 This is what defines Intellectual mafias: Too much discussion (they call it discourse), selective biases, echo chambers, and Pakistan apologists (not all of them). Their biggest talent is - they can just look at you, and establish your intellect level. Their other talent is - even when you are talking about Elon Musk, their discourse (!) will center around caste. And, they lose their marbles every time they hear the word 'Hinduism', or perhaps logic. Broadly speaking, they can be divided into three levels.

According to Cambridge dictionary, intellectual is 'relating to your ability to think and understand things, especially complicated ideas.' And, mafia is 'a close group of people who are involved in similar activities and who help and protect each other, sometimes to the disadvantage of others.'

This is the most basic level, and also the most crowded one. The L3s are influenced by the impeccable English of the mainstream media, talk a lot about ideology and hatred in general. They make fun of all the Hindu rituals and their cool religion is secularism. But, no one takes them seriously. They are not really harmful, can hardly change your mindset. They are just echoing devices - they read very little, they vomit that a lot. How do you spot one: In any argument, you would see them lose temper and get really nasty.

To begin with, it is not really necessary that one would graduate from Level 3 to Level 2. But, the ones who do are certified arm-chair activists. They may not even have their Voter ID cards, but they can dissect everything wrong happening even in Cambodia. All their lives, they wake up with a hangover of Lenin and Marx. They are only adored by L3s, a sane person should avoid them. How do you spot one: They don't let you speak, they call you 'intellectually dishonest' at the drop of a hat.

L1s are the real mafias, and you can't take them lightly. Their agenda is real, their technique is flawless and their ethics are next to nil. They are well learned people, and which is why, you can never catch their lies. They can brainwash people to become L3; as a matter of fact, whatever they say, becomes the holy grail for L3 and L2. They themselves are born with a silver joint, if you may. But, they make you believe they are pro-poor. How to spot one: You can't, and therein lies their genius.

How should an Unoffended Right Indian deal with them?

Like I said before, L3s are harmless. They may be talking ideology one second, but you can distract them with, say, Taimur's picture. L2s are not particularly harmful either. But, they are annoying and argumentative. They should be avoided at all costs. For L1s, you should be a lot vigilant. They could be a university professor, a 'Wire-d' editor, or a political party leader. Their mask often falls when you question them. And, in return, if they make fun of your English or your religion, you can be 50% sure he is an L1.