Bharatiya Janata Party leader Meenakshi Lekhi has slammed Congress leader Navjot Singh Sidhu for the latter's silence over the Friday attack on Gurudwara Nankana Sahib in Pakistan. Addressing a press conference on Saturday, Lekhi asked if Sidhu would hug the Chief of Pakistan's intelligence agency, the Inter-Services Intelligence or ISI, after the attack on the Sikh shrine. Here's more on what she said.

'Does he still want to hug ISI chief?' asked Lekhi

Slamming Sidhu for his silence, Lekhi asked, "Where has Sidhu paaji run off to?" She went on to say, "Does he still want to hug the ISI Chief? The Congress party should find out." Sidhu had infamously hugged Pakistan Army Chief General Qamar Javed Bajwa (and not the ISI Chief as Lekhi mentioned) during Pakistan Prime Minister Imran Khan's swearing-in ceremony in 2018.

What happened at Gurudwara Nankana Sahib on Friday?

On Friday, a mob gheraoed the Gurudwara Nankana Sahib—the birthplace of Sikhism founder Guru Nanak Dev—in Nankana Sahib city, Pakistan. The mob of protestors was led by the family of one Mohammed Hassan, who allegedly kidnapped a Sikh woman, Jagjit Kaur, forcibly converted her to Islam, and married her. Hassan's brother threatened to convert the gurudwara into a mosque while others pelted stones.

Kaur—who's father is a granthi at Gurudwara Nankana Sahib—however, claims she married Hassan willingly. The case of forced religious conversion has reached the courts and the next hearing is reportedly scheduled on January 9. In Friday's protests, Hassan's family demanded the release of their arrested kin in connection with the forced conversion case. Reportedly, the demand was met after negotiations with local administration. 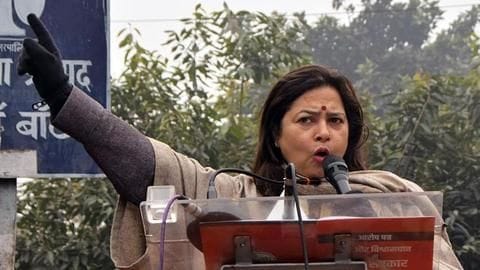 In reference to Nankana Sahib, Lekhi said, "I hope (anti-CAA) protestors would now understand the importance of CAA." The Citizenship Amendment Act seeks to grant Indian citizenship to Hindu, Sikh, Christian, Jain, Parsi, and Buddhist illegal immigrants from Pakistan, Afghanistan, and Bangladesh. For them, the legislation also reduces the required period of residence for India citizenship from 11 years previously to five years.

Further, Lekhi said, "Not just Sikhs. Hindus, Christians, even Zoroastrians face such violence in Pakistan." Funnily enough, the CAA does not mention any provisions for those of Zoroastrian faith, same as the Ahmadiyya Muslims—a community that also faces religious persecution in Pakistan.

Before Lekhi, Union Minister Harsimrat Kaur Badal had also slammed Sidhu for remaining silent on the Nankana Sahib incident. She too referred to Sidhu's "jhappi-pappis" at Pakistan PM's swearing-in ceremony. Badal also said that the incident highlights CAA's importance, asking, "If the granthi's family comes to India to save their lives, what should our government do?"