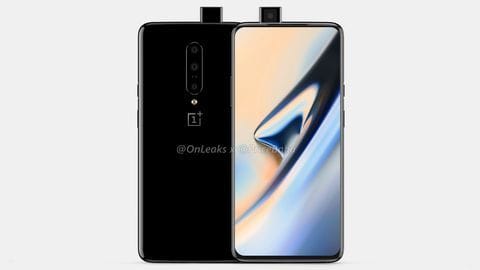 OnePlus's first-ever true flagship phone, the OnePlus 7 Pro, is once again making headlines for its camera capabilities. The National Geographic Magazine has released its first-ever cover that's shot on a phone while Netflix has released two new posters and behind-the-scenes footage of Sacred Games 2. Interestingly, OnePlus 7 Pro was used by both - National Geographic and Netflix. Here's what makes the phone special.

Check out this stunning shot captured by @NatGeo — made possible by the #OnePlus7Pro camera! Where will you shoot first? https://t.co/Q0eAKsfMEw pic.twitter.com/9cnyFTfI7e

Design wise, OnePlus 7 Pro will feature a bezel-less, notch-less all-screen design achieved by housing the selfie camera in a pop-up module. This showstopper design will allow the phone to boast an unprecedented screen-to-body ratio of close to around 95%. Further, an all-glass body, curved screen edges and new color finishes will add to the premium-ness of the upcoming OnePlus flagship.

Display
OnePlus 7 Pro's screen will be a marquee feature

OnePlus 7 Pro will feature a 6.67-inch QHD+ curved AMOLED display with a pixel density of 516ppi and a variable refresh rate of 60-90Hz. A high refresh rate will allow for smoother UI animations and improved gaming experience. A recent leak also claimed that the display will be HDR10+ certified, meaning it will offer upto 4,000-nits of peak brightness.

OnePlus has announced that its upcoming premium phone, the OnePlus 7 Pro, will support Netflix HDR. With this, the OnePlus phone joins the coveted club which includes the likes of Huawei Mate 20 Pro and Google Pixel 3 series.

Camera
What about the camera specifications?

OnePlus 7 Pro will be backed by a Qualcomm Snapdragon 855 chipset, paired with Adreno 640 GPU, upto 12GB of RAM and upto 256GB of UFS 3.0 internal storage. Under the hood, it will pack a 4,000mAh battery with 30W Warp Charging support. Moreover, the phone is tipped to offer improved vibration motor for haptic feedback as well as stereo speakers.

Pricing
OnePlus 7 Pro: The company's most expensive offering till date

Information
OnePlus 7 series to launch on May 14

OnePlus 7 and OnePlus 7 Pro will be officially unveiled on May 14 in India, US, and Europe. In India, the launch event will be held at Bengaluru International Exhibition Centre and it will start at 8:15 pm local time.