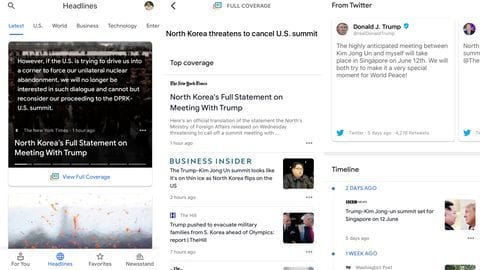 Google had refreshed its Google News service and brought all of its news products under it at the recently concluded annual developer conference Google I/O 2018. The new Google News is now available on the Apple App Store and the Google Play Store in 127 countries. The refreshed app, that replaces the old Google Play Newsstand app, is now divided into four sections.

The refreshed Google News uses AI to understand complex, fast-breaking news stories as they evolve. This helps it take in the constant flow of information and analyze it in real-time to offer the end-user organized, easy-to-understand stories in the form of chronological and aggregated timelines.

The first section in the new Google News app is "For You" that features top five stories that Google's AI thinks you want to read. Since this depends on your Google News activity, the five stories could be anything: global headlines, local news, new developments on stories you've been following, or a mix of all.

Headlines
For the ones interested in in-depth news coverage

The next section is called "Headlines" and it displays the latest news across sections like "World," "Business," and "Tech." Under it, you can delve deeper into a story with Google News' new "Full Coverage" feature that aggregates published stories in real-time and allows users to see how they are being reported from different sources and in multiple formats like timelines, FAQs, and tweets.

Another section is called "Favorites." It allows users to save their preferred topics that can be anything from news to opinion to academic reading. The section is manually customized by the user without any AI interference. It can be used to save stuff you might want to read later. You can also save location- and text-based searches that you want to look up later.

Since Google Play Newsstand has gotten folded into Google News, its functionality has also found a new place in the latter's UI. The last section is a dedicated tab that features over 1,000 publishers. An upcoming feature called Subscribe with Google will also let you subscribe to publishers and access paid content across platforms, including Google News, Google Search and publishers' own websites.