Now, your Android phone can alert about easy-to-miss household sounds 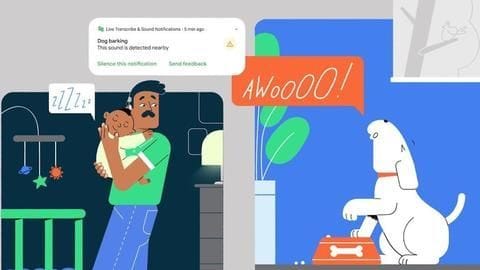 Google is bringing a handy new feature on Android, one that will help people to take note of important but easy-to-miss sounds in their homes. The capability is particularly geared toward individuals who are deaf or hard of hearing but could also prove handy for those who often work with their earphones plugged in. Here's how the feature works.

The sound detection feature comes as part of the Live Transcribe technology on Android. Originally, the capability converted spoken words into written words in real-time, but now, if enabled, it can even detect household sounds and issue notifications to your phone or smartwatch to alert about the same. This can help in keeping tabs on important things while focusing elsewhere at the same time.

Detection
10 different sounds can be detected

In its current form, the novel feature can detect 10 different household sounds, Google says. They include smoke and fire alarms, sirens, shouting sounds, ringing doorbells, knocking on the door, and beeping from appliances. More importantly, the device can also pick up and notify you about running water, barking dogs, incoming calls on landlines, and sounds made by babies.

Timeline
Timeline of notifications can also be accessed

Along with real-time alerts, Google will also maintain a timeline, where you could find which sound was detected at what time in the past. This way, you can keep a track of small home-specific things like when the water tank was full or when the baby was asleep in his/her room. Notably, Apple also has a similar feature but without the timeline option.

Update
Available on Pixels or through Live Transcribe app

The sound detection feature is coming to Pixel phones and select other Android phones as part of an accessibility features' update and can be enabled directly from the Accessibility menu in Settings. For others, The Verge reports, the new capability can be tested and used by downloading the Live Transcribe app on their Android phone from the Google Play Store.