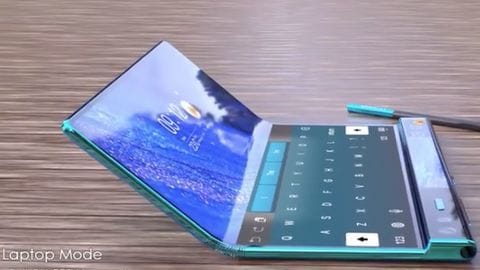 Ahead of its expected launch later this year, tipster Ross Young has shared the renders of Huawei's upcoming foldable smartphone, the Mate X2. The renders have been taken from a concept video that shows the device in an all-new in-folding avatar and highlights some of the expected specifications. Notably, Young confirms that the final design won't be much different from the renders. Here's more.

Design and display
Huawei Mate X2: At a glance

As per renders, the Mate X2 will have an in-folding screen as against the out-folding design we saw on the Mate X. The external shell will open up to reveal an 8-inch screen while the holdable "wing" will house a 4.5-inch OLED display for previewing notifications and call alerts. The device will also support a stylus that will be housed within the "wing".

Information
For the shutterbugs and selfie lovers

The Mate X2 is tipped to feature a quad rear camera setup including a 40MP primary sensor, a 40MP ultra-wide lens, a 12MP telephoto camera, and a 5MP depth sensor. On the front, a 32MP+16MP dual-lens setup is expected on the "wing" section.

The Huawei Mate X2 should draw power from a 5G-ready Kirin 1000 chipset, coupled with up to 16GB of RAM and up to 512GB of storage. Under the hood, it is likely to pack a 6,000mAh battery with support for 65W fast-charging. Additionally, a fingerprint scanner will be concealed within the secondary "wing" display.

The Huawei Mate X2 foldable smartphone is expected to make its global debut later this year. At present, there is no information regarding its price but we expect it to cost around €2,000 (roughly Rs. 1,75,000).