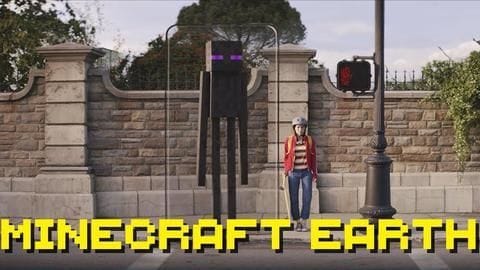 Minecraft, the game that involved collecting blocks, digging, and building stuff in a virtual 3D environment, is getting a major reboot with the mind-blowing touch of augmented reality (AR). Yes, Microsoft, the company behind the famous game, has announced Minecraft Earth, a title that brings elements of Minecraft into the real world, using AR. Here's all about it.

Microsoft has taken the concept of Pokemon Go, which involved collecting AR Pokemons, and enhanced it for Minecraft. Basically, the new game is all about gathering resources, items, and blocks while roaming around in the real world and teaming up with others for using those resources to build something. Whatever you build will appear on top of the real world in the game.

Information
Plus, you'll be able to take part in challenges

Microsoft says the players would be able to take part in challenges and fight mobs of hostile creatures in the game. Also, interestingly, you will be able to see and interact with the creations of other players in your area too.

While Minecraft Earth will offer building experiences in the real world, its exact working remains to be seen. The teaser for the title only shows the fancy things - like collecting objects and creating stuff. For real understanding, the app needs to be tested, which will show how things will work when you use the camera continuously for placing block creations in your surroundings.

Information
Minecraft Earth will have some safety controls

Microsoft has emphasized Minecraft Earth will have a reporting system for player safety but it's not clear how it will help. Notably, the company could also offer Pokemon Go's speed sensor which locked players out of the game on detecting high movement speeds.

Minecraft Earth will be free to download on iOS and Android devices, but as of now, there is no word on when it will be available. Microsoft has given no timeline for the full launch but says the limited beta will be available later this year. If you want to try and build your own Minecraft world in AR, sign up here: https://bit.ly/2JOqpzp.