OnePlus 6-Avengers edition to launch in India on May 17

OnePlus 6 is days away from becoming official. As we inch closer to the countdown, more and more leaks continue to appear on the internet. In the latest such leak, the retail box for OnePlus 6 Marvel Avengers Limited Edition has appeared online. It is a special OnePlus 6 variant that will launch on May 17 in India, alongside the regular variant. Here's more. 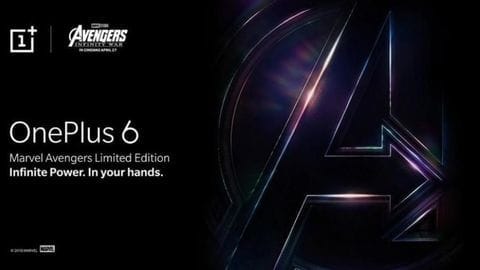 OnePlus recently confirmed the launch of this limited edition variant via an official teaser video. The video reveals that this variant will feature a textured back which will differentiate it from the regular variant. Additionally, the front-side of the handset also featured in the video but it didn't reveal much, except for a notch-based display.

Last year, OnePlus partnered with Star Wars, another Disney franchise, to launch its OnePlus 5T Star Wars variant. On the back, the phone was decorated with the Star Wars logo, and the side button was a themed scarlet red. The phone also came with a Star Wars theme and wallpaper. On those lines, OnePlus 6 Avengers-edition may have similar accents and UI aesthetics.

The Avengers-themed OnePlus 6 will have the same display, camera, and internals as the regular variant. So, you can expect a 6.2-inch Full HD+ display with 19:9 aspect ratio, Snapdragon 845 processor, 16MP + 20MP dual-rear cameras, and 3,450mAh battery. Running Android Oreo-based Oxygen 5.1, the regular OnePlus 6 will feature three variants with expected pairings of 6GB RAM/64GB, 8GB RAM/128GB, and 12GB RAM/256GB.

Given last year's OnePlus 5T Star Wars edition was priced about Rs. 1,000 more than the regular 5T, we expect similar pricing for the Avengers-themed OnePlus 6 edition as well. Moreover, like the regular OnePlus 6, the Avengers-themed variant will also be Amazon exclusive in India. Reportedly, OnePlus 6 will cost Rs. 36,999 for the 64GB variant and Rs. 39,999 for the 128GB model.