AI algorithm can teach cars to self-drive in 20 minutes 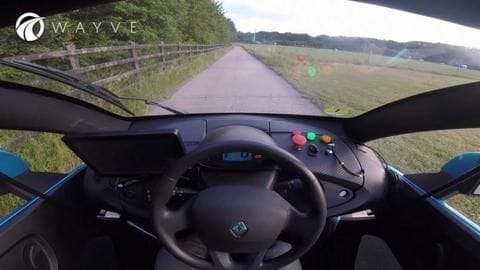 Wayve, a startup founded by two researchers from the Cambridge University, has developed an artificial intelligence (AI) algorithm that can learn how to drive a car from scratch in 20 minutes. Just like humans, the sophisticated neural network uses reinforcement learning to do so. Instead of relying on external sensors and custom-built hardware, the startup wants to create autonomous vehicles which are entirely software-based.

Wayve fitted a Renault with a camera and the ability to computer-operate the steering, gas, and brakes. It was hooked up with a learning program to intelligently analyze the camera's data in real-time. Then the car was given full autonomous control. Every time it off-roaded, a human driver corrected it. The algorithm accordingly kept tweaking itself, and within 20 minutes learned how to drive.

The AI algorithm powering Wayve's self-driving system doesn't require any cloud connectivity or pre-loaded maps. It is a four-layer convolutional neural network that processes everything on a GPU. According to Wayve, too much hand-engineering is currently deployed to solve self-driving car problems. "The missing piece of the self-driving puzzle is intelligent algorithms, not more sensors, rules, and maps," co-founder and CEO Amar Shah said.

Smart algorithms
Machine learning as the foundation of autonomous cars

Wayve said, "Imagine deploying a fleet of autonomous cars, with a driving algorithm which initially is 95% the quality of a human driver. Such a system would be almost capable of dealing with traffic lights, roundabouts, intersections." "After a full day of driving and on-line improvement from humans, the system would improve to 96%. After a week, 98%. After a month, 99%," it added.