Projector smartwatch turns your arm into a touchscreen interface 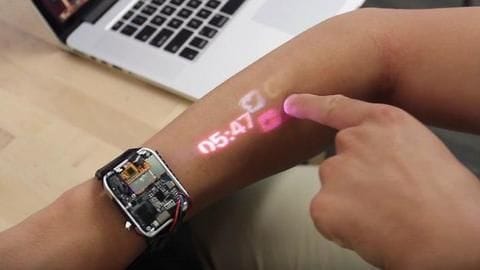 Researchers at the Carnegie Mellon University have developed a smartwatch that can project information onto your arm and let you interact with it as well. Called LumiWatch, the prototype smartwatch essentially turns your arm into a touchscreen as it projects an interactive surface which can be tapped and swiped from the skin. Researchers call it the "first fully-functional and self-contained projection smartwatch."

Working
The projections are bright enough to be seen outdoors

This is how the watch works: you swipe left on your skin to unlock the watch which results in apps getting displayed along your arm. The interface projection is up to 40 square centimeters, which is reportedly five times bigger than a standard smartwatch's interface. However, the watch itself is rather bulky, measuring 2x1.6x0.66 (inches). In comparison, the Apple Watch Series 3 measures 1.67x1.43x0.45 (inches).

To prevent distortion of projection, the prototype watch first detects when the swipe left to unlock mechanism is used. It then proceeds to track the user's finger in order to optimize the angle of the projection so that the interface is smooth and usable.

Details
The projector smartwatch could be sold at $600 in future

The LumiWatch is made up of a logic board, projector with red, blue, and green lasers, depth sensor, and metal enclosure. It features a Qualcomm 1.2 GHz quad-core processor, 768MB RAM, 4GB storage, 740mAh battery that can last over one hour with continuous projection, Bluetooth and Wi-Fi capability, and the Android 5.1 OS. The retail cost of the watch is estimated to be $600.