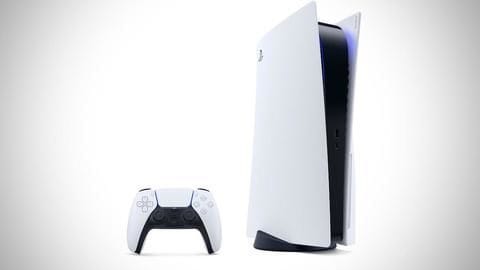 After years worth of rumors, Sony has finally given us the first good look at the PlayStation 5, its next-generation gaming console. The device, showcased after an hour of PS5 game announcements, looks completely different from its competitor, Microsoft's Xbox Series X, and comes with a sleek futuristic-looking body that can be placed either horizontally or vertically under your TV. Here's more about it.

At the very outset, PS5 looks completely terrific. The console features a black core surrounded by curved white edging that protrudes at the top, giving a wings-like look. You can see a fancy blue glow at the top-end of this core, with vents for heat dissipation, and USB-A and USB-C ports on the front side.

So are you guys getting the Mini Fridge or the Wifi Router? pic.twitter.com/vO0i0lA4Xq

Specifications
What's on the inside?

The new PS5 comes with a 4K Blu-ray drive, an eight-core AMD Zen 2 CPU, and a custom AMD RDNA 2-based GPU. The chips are rated to churn out 10.28 teraflops of power for much-improved, super-fast gaming, with up to 8K graphics and 3D Audio being supported. Notably, it also comes with Sony's own 825GB SSD, which will further reduce game load times.

Accessories
Additionally, a number of accessories will be included

Along with powerful internals, the PS5 console also packs some tempting accessories for upgrading your gaming experience. This includes a new DualSense wireless controller, its charging station, a new HD camera, a Pulse 3D wireless headset, and a media remote. The new controller offers adaptive triggers for gameplay, haptic feedback, and a new create button to record and share game content.

Sony has not shared the exact pricing or availability details of PS5, but it is expected to be launched before the end of the year, much like Xbox Series X. The device will be available in two variants: one with the 4K Blu-ray drive and the other without the optical drive. The latter will be a substantially thinner model and could be more affordable.