Former UFC Featherweight Champion Conor McGregor is making his return to Mixed Martial Arts (MMA) as he faces Donald Cerrone at UFC 246. While he had lost his previous match against Khabib Nurmagomedov for the Lightweight Championship, the bout was marred by controversy. Meanwhile, McGregor has stated that Khabib would never want a rematch as the latter is scared of him.

McGregor feels Khabib was trembling while thinking of facing him 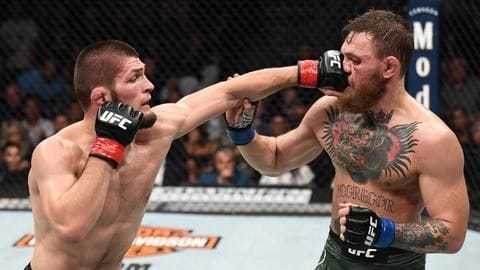 In an interview with TheMacLife, McGregor said that he feels Khabib was trembling out of fear thinking of facing him again, as he does not want it and is afraid of him. "But, everyone wants it. The boss wants it, Dana [White] wants it, we all want it. So, he can run, but he cannot hide. I look forward to it," he said.

"That last camp was horrendous and I have no one to blame but myself and I did blame myself and made the corrections. Thankfully, I have a strong team behind me that are pushing me and guiding me the right way," added McGregor.

"He is trembling... he can run, but he cannot hide."@TheNotoriousMMA wants a rematch with Khabib, calling his training camp for their first fight "horrendous."

As far as the previous bout between the two is concerned, it was a fight for the ages. While the match lasted until the fourth round, Khabib retained his Lightweight Championship after making him tap out via neck crank submission maneuver. Furthermore, Khabib had done his homework properly against McGregor, as he perfectly countered the latter's signature move.

Following the conclusion of the bout, controversy erupted as Khabib hopped out of the octagon to attack members of McGregor's support staff. This led to a brawl between the staff of both the parties as security personnel intervened and restored order, while Khabib and McGregor were escorted out of the arena. Meanwhile, UFC President Dana White suspended Khabib for nine months and fined $50,000.

McGregor has a fine MMA record