SRH vs RCB: How to pick the ideal Dream11? 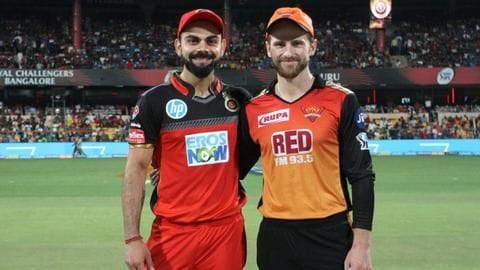 The IPL 2019 has already given us a couple of interesting ties. And the match between Sunrisers Hyderabad and Royal Challengers Bangalore will be another thrilling affair. The match is scheduled for a 4 PM start on Sunday in Hyderabad. While SRH dominated Rajasthan Royals in their last match, RCB are coming off a controversial loss. Here is our Dream XI for this tie.

Wicket-keeper
Jonny Bairstow: The man behind the stumps

Starting with the wicket-keeper, SRH's Jonny Bairstow is the man for the job, owing to his sound skills behind the stumps. Apart from his keeping, Bairstow is also in fine form with the bat, as he scored a 28-ball 45, allowing his side to pull off a monumental chase against Rajasthan Royals. Understandably, Parthiv Patel's inconsistent form remains a concern for RCB.

As for the batsmen, SRH's David Warner is our pick as the opener of this team, courtesy his form. He will be joined by AB de Villiers, who has been the backbone of RCB's line-up. Further, picking RCB skipper Virat Kohli in this XI is a no-brainer. If either Kohli or AB gets going then RCB can pull off a victory against any team.

All-rounders
Vijay Shankar, Moeen Ali are crucial for their teams

The all-round department is set to consist of Vijay Shankar as well as Moeen Ali. Shankar is enjoying brilliant form, especially with the bat, for both his country and IPL franchise. Moeen Ali has been doing great in both the departments, therefore makes it to the list. RCB rookie Shivam Dube also gets a go-ahead as the third all-rounder.

As for the bowlers, SRH's deadly spinner Rashid Khan is the first one to seal his spot. He is accompanied by his team-mate Siddharth Kaul, who is likely to rattle the RCB's batting order with his 130+km/h pace. From RCB, charismatic leg-spinner Yuzvendra Chahal has been dominating with his spin, while Navdeep Saini can prove to be lethal.

Warner is the right man to captain this side, considering his form as well as batting skills. He is likely to play another superb innings against RCB. As for the vice-captain, AB gets the nod, courtesy his out-of-the-world consistency. For Kohli, it has been a tough ride in the first two match, therefore he misses out.

The reason for picking Dube is because he has the backing of his captain. While he is yet to play a big innings in the tournament, he has been in fine form in the domestic circuit. Saini and Kaul have been picked up due to credit constraints, as picking all the top players is practically impossible in any fantasy game.