There was a time when Daniel Bryan was mocked for his beard and called a goat, as he lost almost every time, especially against Kane. Both of them were sent to anger management sessions, where Dr. Shelby counseled them. The entire session was ridiculous, but viewers had a great time enjoying the differences between Kane and Bryan, before they graduated and 'hugged it out'. Besides being a professional wrestler and an actor, The Rock is also a musician. He hosted a number of concerts, usually called "The Rock Concert". However, the funniest concert was in 2012 when he humiliated then SmackDown General Manager Vickie Guerrero with his hard-hitting lyrics. While his lyrics were initially in praise of Vickie, the humiliation which followed next made Vickie lose it. Back during the Attitude Era in 1997, there was a segment involving Kane, along with Rock and Hulk Hogan, where Kane had once again lost it and presented a comic version of himself. Prior to their match against nWo, Kane cheered Rock and Hogan up with weird catchphrases, while he emulated both of them, as they were all left baffled.

Insulting debut
The Rocks insults Chris Jericho on his debut Chris Jericho's debut makes the list for a unique reason. As he made his debut in April 1999, he in the process interrupted Rock, who was delivering a promo. Feeling humiliated, Rock asked Jericho for his name. Before Jericho could make a comeback, Rock gave his signature reply, 'It doesn't matter what your name is', while the crowd went ecstatic, making the segment funny.

Hospital trouble
Stone Cold takes out the boss in the hospital 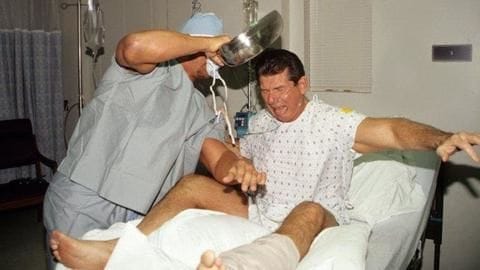 Undoubtedly, the one that has to be the funniest of all time is when Stone Cold Steve Austin decided to take on the boss Vince McMahon in the hospital. Recovering from a storyline injury received at the hands of Austin, the latter disguised himself as the doctor and attacked Vince. Hitting him with the bedpan, to giving him a shock, it's funny indeed.