'777 Charlie' teaser: The adventurous journey of a four-pawed protagonist 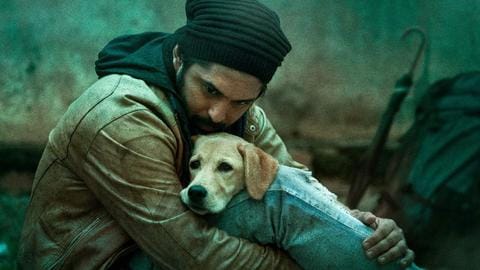 Makers released the teaser of the upcoming multilingual drama 777 Charlie recently, and it presents a fulfilling, heartwarming premise. At the center stage is a female dog named Charlie, who is on a journey. "An adventure when Charlie meets Dharma," read one of the captions of the teaser, which mostly featured the canine. In the end, we see Kannada actor Rakshit Shetty (Dharma).

Teaser
When Charlie finds her 'someone' in Dharma

In the first scene, Charlie breaks out of a house, after which we are introduced to her motive. She runs through cities, jungles and streets, hides in trucks, and rummages through a massive garbage dump, all to meet someone. It is only at the end we find, that "someone" is Dharma. Their adventure together is going to make the crux of the movie.

Information
It will be released in Kannada, Malayalam, Tamil, Telugu, Hindi

The two-minute-long clip makes you want to embrace Charlie tightly. This feeling seems to be universal, as far as the massive YouTube views (4mn) on the video are concerned. Announcing the launch of the teaser, Shetty wrote, "We hope that you will receive our labor of love, with love. #LifeOfCharlie is now out." It will be released in Kannada, Malayalam, Tamil, Telugu, and Hindi.

We hope that you will receive our labour of love, with love. #LifeOfCharlie is now out 😊

Cast
Shetty is producing the venture along with GS Gupta

Written and directed by Kiranraj K, 777 Charlie has been produced by Shetty and GS Gupta under the banner of Paramvah Studios. Sangeetha Sringeri, Raj B Shetty, Danish Sait, and Bobby Simha make up for the rest of the primary cast. Pramod BC has trained the canine. Interestingly, many noted film personalities have come forward to present this adventure-comedy project in different languages.

While actor, filmmaker, and producer Prithviraj Sukumaran teamed up with the makers to present the Malayalam version under the banner of Prithviraj Productions, director Karthik Subbaraj will be presenting the Tamil version via his Stonebench Films. Earlier, while announcing the association, Sukumaran said he had seen significant footage from the movie, and narrated how it was "heartwarming in content" and "mind-blowing in execution."