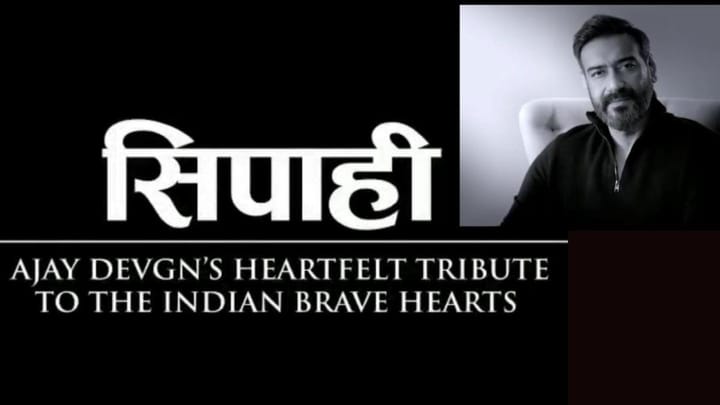 Ajay Devgn has released a special video clip today, where he has recited a Hindi poem, Sipahi, paying "heartfelt tribute" to soldiers. The video was widely shared, and commented upon. Devgn's recital and the words won over many hearts. Notably, we also get to hear a part of this poem in the trailer for his upcoming war movie Bhuj: The Pride of India.

Poem talks of a soldier's brave-face even while embracing death

The poem talks about a soldier's message to his fellow comrades. He wishes to fulfill all the dreams and aspirations of his mother, father, siblings, and lady love. While his death means none of these dreams can come true, he still suggests tragic alternatives. The lines "Bharat Ma ka sath nibhate hue, uska saath chhut gaya," resonate a soldier's sacrifice deep and loud.

Akshay Kumar corrected himself after mistakenly crediting poem to Devgn

The video clip received acclaim from all quarters, with many colleagues of Devgn applauding the narration. Akshay Kumar was also among them, who said he was "in tears." However, he mistakenly attributed the poem to Devgn, when in reality it is a work by Manoj Muntashir. Upon realizing the gaffe, Kumar corrected himself soon. Pats came from Abhishek Bachchan and Suniel Shetty as well.

Just got to know that the words of the very moving poem are by the amazingly talented @manojmuntashir. Narrated by @ajaydevgn

Glorifying such romantic ideals of wars trivializes loss of lives

While the lines of the poem are honest to Bollywood's brand of war and a soldier's valor, this glorification does more harm than good. It is time major Hindi actors realize not every soldier "lives to die." The pride of being a martyr's kin is short-lived; what pains longer is the loss of an individual. Soldiers are also humans and do deal with trauma.

'Bhuj' is getting released during Independence Day week

It would have been refreshing if the movies treated soldiers as humans first, instead of seeing them as a lot through the glass panes of romanticism. Given this poem is used in Bhuj, the chances of the film offering a different perspective are less. The period movie, based on the 1971 air raids in Bhuj, Gujarat, will drop on Disney+ Hotstar on August 13.