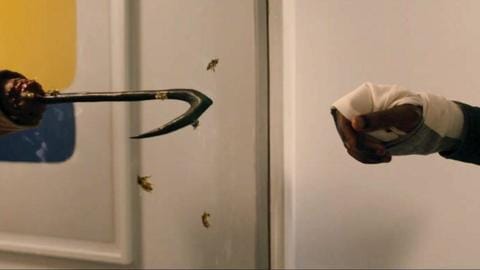 A new trailer of Candyman is out and it's super scary. Slated to release on August 27, this is a sequel to the 1992 classic horror film by the same name. This upcoming Nia DaCosta-directorial stars Watchmen actor Yahya Abdul-Mateen II, who portrays an artist named Anthony McCoy, based in Chicago. In the movie, he becomes obsessed with the creepy story of Candyman.

Story
What happens in the trailer?

The trailer begins with the story of Candyman, who used to give candies with a razor blade inside. Although police kill the man, a couple of weeks later, more candies with razor blades appear. While the lead character, McCoy, thinks Candyman is a person, another man remarks, "Candyman ain't a he, Candyman is the whole damn hive." And, McCoy didn't stop digging deep since.

Remember the horror folklore that says repeating "Bloody Mary" 13 times in front of a mirror summons the ghost. Well, Candyman works the same way. The only difference is one has to repeat the name five times while looking into a mirror. The trailer shows McCoy and a few children separately trying to call on the supernatural killer. And then, the nightmare begins.

This trailer not only gave out the scary element one will experience while watching the film, but also hinted at how creepy Candyman's appearance will be. He is portrayed as a murderous supernatural man with a hook for a hand. The visuals of the violence that followed after McCoy summoned Candyman are bone-chilling. Also, the background sound with the scenes is perfectly put.

Verdict
'Candyman' can be as good as the original

The original version of Candyman is a cult classic horror movie based on the short story, The Forbidden, by Clive Barker. After watching the new trailer, DaCosta's version too has the potential to live up to the expectation. Tony Todd and Vanessa Estelle Williams from the original will reprise their characters in this movie, alongside Abdul-Mateen II, Teyonah Parris, Colman Domingo, and Nathan Stewart-Jarrett.