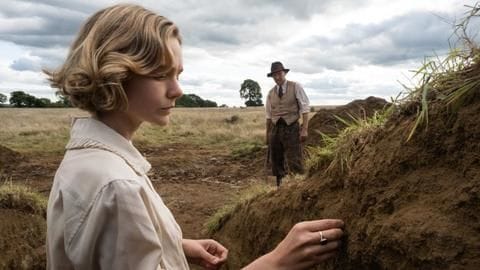 Netflix's period drama, The Dig has released its first-look trailer on YouTube and the least we can say about it is, that it's indeed revealing. The film, directed by Australian filmmaker Simon Stone, will hit select UK theaters on January 15, and stream on Netflix after 15 days. It stars Carey Mulligan, Ralph Fiennes, and Lily James and is based on a true story.

The film is based on the novel by the same name by John Preston, which elucidates the groundbreaking discovery of an Anglo-Saxon burial ship in a cemetery named Sutton Hoo, Suffolk, Britain just before World War II hit the country. The trailer opens with Edith Pretty (Mulligan), owner of Sutton Hoo, who asks amateur excavator Basil Brown (Fiennes) to check on the mounds.

Premise
Brown's character is juxtaposed between low confidence and modesty

Notably, the character of Brown is juxtaposed between low confidence and modesty. Brown corrects a young boy calling him an archaeologist by mistake and reasons with Pretty that such works are "usually done through museums". However, the museum is busy aiding the British army in the war and has less interest in a town affair unless Brown's shovel finds fishy mud lines, she retorts.

Story unfolds
"Why would anyone want to bury a ship?"

As Brown keeps digging, he realizes he is poking at the outlines of what can be called a huge ship. "Why would anyone want to bury a ship?," she wonders, and soon word spreads. Eventually, museum officials and press take interest and archaeologists find buried bodies and even jewelry, stoking people to dig deeper in the hopes of discovering treasure and owning it.

Trailer details
Brown develops a bond with Pretty, who is a widow

Brown develops a bond with Pretty, a widow, while archaeologist Peggy Preston (James) is seen getting cozy with another anonymous digger enacted by Johnny Flynn. Other actors featured in the trailer include Ben Chaplin, Ken Stott, Archie Barnes, and Monica Dolan. With a screenplay by Moira Buffini, the film's rights were initially owned by BBC Films, before Netflix took it over from them.